AFTERBUZZ TV – AfterBuzz TV’s Spotlight On edition, is a long form interview series featuring Actors and TV personalities discussing their roles and shows as well as their thoughts, passions and journeys. In this episode host Jason Ikeler interviews Zara Larsson.

Zara Maria Larsson is a Swedish singer.[1] She received national fame for winning the 2008 season of thetalent show Talang, the Swedish version of Got Talent. Zara signed with the record label TEN Music Group in 2012 and released her debut EP album Introducing, in January 2013. The single “Uncover” topped the charts in Sweden, Norway, and Denmark. Both the single “Uncover” as well as the album Introducing were certified triple platinum in July 2013 by Universal Music Sweden.[2] Zara also signed a three-year contract with Epic Records in the United States in April 2013.[3] She lives with her mother, father and her younger sister.

Zara Larsson was born on 16 December 1997 in Stockholm, Sweden. She has one younger sister, Hanna (born 2000). She sang a lot as a child, which made her parents notice her talent. She was a finalist of the Swedish talent show Stjärnskott 2007 before appearing on Talang.[4]

During Talang 2008 she performed three songs: “The Greatest Love of All” and “One Moment in Time” by Whitney Houston, at the audition and the semi final respectively; and “My Heart Will Go On” by Celine Dion at the final. She won the competition at age 10, and received the prize money of 500,000 SEK as a result.[1][5] “My Heart Will Go On”, the song Zara sang at the final, was released as her debut single. Her performance in the final has received over 14 million views on YouTube.[6] 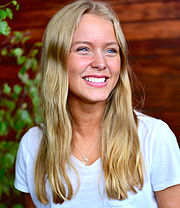 Although very little news was heard for over four years following her Talang victory, Zara signed withTEN Music Group in 2012 to release her debut EP album. The album, named Introducing, was revealed on December 9, 2012 through a preview of the song “Uncover” on YouTube.[7]

The album was released on January 21, 2013, featuring five songs. “Uncover” was released as the album’s lead single; it peaked at No. 1 on both the Sverigetopplistan and DigiListan charts,[8] as well as reaching No. 1 in Norway and peaking at No. 3 in Denmark,[9][10] and by February 25, 2013 the song was certified Platinum in Sweden and watched over 5 million times on YouTube.[11] The song also entered the Svensktoppentracklists. In July 2013, the song was certified triple platinum in Sweden by Universal Music Sweden.[2] At Sommarkrysset in Gröna Lund in July 2013, she also received a triple platinum award from Universal Music Sweden for her debut EP Introducing, for “sales in excess of 120.000 units in Sweden”.

Zara was one of the opening acts for Cher Lloyd during her I Wish Tour in North America in late 2013.

For more of your post-game wrap up shows for your favorite TV shows, visit https://www.AfterBuzzTV.com
1/23/2015