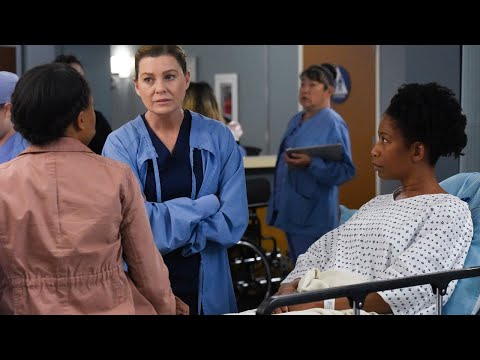 This episode of Grey’s Anatomy kicks off with some of our favorite doctors coming together to figure out what’s wrong with Richard Webber. Since we last saw Richard his condition has not improved, and the media is making a joke about it. Katherine is having a tough time dealing with what Richard’s condition, and realizes she was wrong for what she put him through. An intense moment happens between Meredith and Richard, where she finds him in the operating room about to perform surgery on himself. Meredith is able to talk him out of it, and we end with DeLuca, whose suspended from the hospital, and  Meredith trying to figure out what’s happening to to their friend.

Elsewhere Tom gets a visit from his ex-wife and her son, who looks exactly like Tom’s son who passed away years ago. She tells him he has cancer and it’s spreading. Tom is the only doctor that she wants to operate on her son, but The resemblance is too much for Tom and gets Amelia to perform the surgery.

While is Surgery Amelia starts having contractions, and thinks she’s about to give birth. She leaves  it all up to Tom. Teddy sees that Tom is not in the right head space and gives him a pep talk, giving him the motivation he needed to save the boy.  After Tom and Teddy have a flirtatious moment alone, she rushes to Owen and tells him she’s all in  and wants to get married as soon as possible.

Elsewhere Amelia finds out it was a false alarm. Link who not to long ago treated a patient who couldn’t stop singing, is there to comfort her. They both lie on the bed waiting for when that special day will come that will change their lives forever.

In the Season finale of Grey’s Anatomy, Meredith and Deluca team up to figure out Richard’s illness. Most doctors including Maggie assume its Alzheimer’s but Meredith disagrees. Right before Richard is released from the hospital he starts experiencing numbness in both his hands and feet; plus sensitive to touch. Deluca is able to figure out that Richard has cobalt poisoning from a hip replacement which can cause symptoms of dementia and hallucinations. Meredith sticks up for Deluca convincing Bailey that he earns a spot in the operating room. Amelia’s water breaks and while Link is called into surgery to help Richard; Bailey helps Amelia deliver her baby boy. Tom begs Teddy to not go through with the wedding. Owen receives a voicemail hearing Teddy hooking up with Tom. Owen blindsides Teddy and cancels the wedding without letting her know.