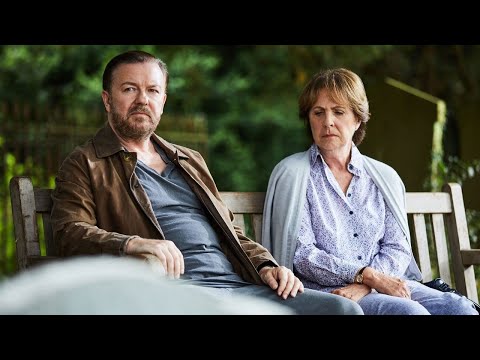 Ricky Gervais new dramedy follows a widower in mourning developing a less than appealing personality to push away anyone who’s still interested in helping him. Join the AFTER LIFE AFTERBUZZ TV AFTER SHOW as we attempt to reach the unreachable. Subscribe and comment to stay up to date.

It’s Sandys 30th birthday and she is feeling not so happy with her life. Tony tries to console her and in the act of doing so actually expresses his emotions as well. George asks Tony about his parents’ status on their marriage. A love triangle develops between Emma, Tony, and Simone when Tony jealous forces him to get in the middle of the two.  A lady who believes she can talk to cats and has dealt with losing loved ones reminds Tony to be kind to her and her loneliness reminds him of himself. Matt is dealt another bad card when the Gazette is threatened when the owner Paul says he wants to sell because there isn’t enough profit coming in. Tony makes a major commitment to keep the paper alive. Pat and Roxy have their date, and all goes well. The Gazette team tries to come up with different ways on how to save the paper while a cake fight brakes out. Matt fails at an attempt to flirt with women at the bars and Tony gets upset. Tony runs into Emma and Simone which ends things on a bad note.

Roxy, Pat and Tony have an interesting breakfast together the morning after their date. Matt goes to therapy expressing how he wants to beg for his wife back. Kath asks Matt about going to the review together as a date but gets rejected. Tony takes Kath to get coffee to console her because she was embarrassed about getting reject, but again is faced with his own emotions in the attempt of doing so. While visiting his dad, Tony confronts Emma about her date with Simon and expresses his feelings for her and how he doesn’t want things to change. Matts wife gets irritated at Kath wanting to date so they agree to attend the review together and sparks back up the potential to fix their marriage. Tony begins to drink before his visit with Anne stating that his positivity is fake, and he still is an emotional wreck. He cries while Anne comforts him. It ends with a positive note between Tony and Paul agreeing on giving the paper one last shot before he tries to sell it and Tony sticks to his word.

This After Show Was Hosted By: Gabriella Castania, Ashmin Ram

After Life After Show Podcast
Ricky Gervais new dramedy follows a widower in mourning developing a less than appealing personality to push away anyone who’s still interested in helping him. Join the AFTER LIFE AFTERBUZZ TV AFTER SHOW as we attempt to reach the unreachable. Subscribe and comment to stay up to date.
It's an Emotional Rollercoaster of a Finale – S1 E5 & E6 'After Life' Recap & After Show
by AfterBuzz TV

The season finale is an emotional roller-coaster consisting of unexpected events. Tony’s father Ray Johnson ends up passing away peacefully in his sleep. Tony does his best to cope with his father’s death and gives a beautiful eulogy at his funeral highlighting nurse Emma. Emma and Tony try to figure out where there relationship can go since he will no longer be visiting at Autumnal Leaves Care Home. Pat and Daphney continue to like each other and Pat begins to consider Daphney as his future wife, while she is reluctant about her past messing things up for her. Matt and his wife Jill choose to reconcile so he will no longer be needing therapy; however, the therapist has a breakdown of his own. Anne and Paul seem to come together and find comfort in one another. Lastly, Tony attempts to commit suicide and is merely saved by Emma.

How Jesse Lynn Madera is Surviving the Quarantine | AfterBuzz TV

What if Luther Vandross Were Alive Today?
Scroll to top