Skip to content
The second half of this season picks up right where we left off with Annalise off the grid and everyone wondering if she’s been abducted by the Castillo’s or simply running away from her problems after the FBI investigation has relaunched. Connor and Michaela are going through the motions of just being arrested for Asher’s murder, with Connor having a panic attack and Michaela being told that her fingerprints are on the murder weapon. Oliver confesses to the murder genuinely thinking that he fatally wounded Asher after Asher’s admission of being the mole. The confession doesn’t stick and he is later released. Michaela and Connor hire attorneys with the help of their parents (here’s looking at you Solomon Vick), and take a deal that would give them five years in prison for admission of lesser charges, but immunity in all other charges. They do this after learning that the FBI has information leading all the way back to the murder of Rebecca, but they each save one another in their respective deals. More importantly, the deal says they agree to ‘confess’that Annalise forced them to kill Sam for her.
Frank and Bonnie help us relive the night of Asher’s murder. From Asher showing up at Bonnie’s house and trying to provoke her to saying something incriminating- to Frank driving Asher back to his apartment and not falling for the same trick. Before his death, we see Asher pay a visit to Gabriel (clearing up that mystery from the first half of the season) where Asher offers Gabriel his $64,000 won from Annalise to borrow Gabriel’s phone. Tegan admits to helping Laurel disappear, and Annalise is ultimately caught by the FBI after refusing to go with a mystery woman who was tasked with taking her to her next location.
This After Show was Hosted by: April Whisenhant, Elayna Fenelon, Jaimi Gray and CJ Walker

While Annalise is planning her escape, things get heated on Nate’s case regarding who killed Nate Sr. Things seem to be falling apart for Bonnie, and with the Governor and Xavier Castillo taking the stand, things may get worse. Our killer panel talks all about tonight’s episode: Jaimi Gray @jaimigray & CJ Walker @icjwalker

The brilliant, charismatic and seductive Professor Annalise Keating (Viola Davis) gets entangled with four law students from her class “How to Get Away with Murder.” Little do they know that they will have to apply what they learned to real life, in this masterful, sexy, suspense-driven legal thriller from Shonda Rhimes and Betsy Beers, executive producers of “Grey’s Anatomy” and “Scandal.” 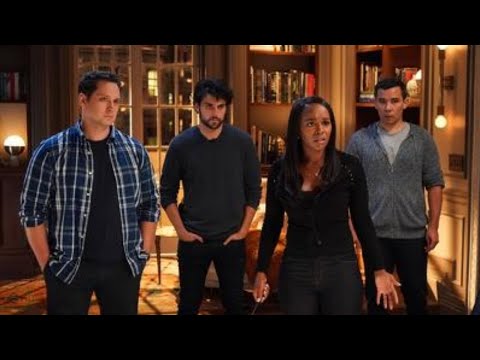 OVERALL PODCAST/SHOW DESCRIPTION HERE
Unfortunately due to the coronavirus there is no recap for this episode of How to Get Away With Murder.
Be sure to check out the After Show hosted by: CJ Walker, April Whisenhant, Elayna Fenolen, & Jaimi Gray