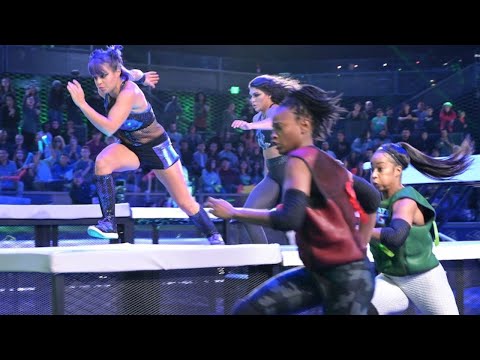 ProTaggers Jesse “La Flair” and Carrie Bernans “Banshee” join Host Alikona Bradford along with the winners of Episode One, Lisa Barber and Charlie White as we discussed the craziness that ensued when a team of professional parkour and stunt athletes face off Olympic Medalists!!!! Lisa  (Olympic Track Runner) shares her internal play by play during The Showdown, which involved a lot of curse words, and what it felt like to have the Banshee on her back.  On the guys side, Jesse La Flair listed Charlie (USA Beach Handball Champion) as his #WhoILoveToHate for flying through the air OVER La Flair during Dodge Tag which now plays on repeat for the show’s promo!!  While it might seem like a lot of trash talking or showing off on camera, at the end of the day Taggers and Players all displayed incredible showmanship and were quick to complement each other on their fierce competitive skills.
About the Guests:
Jesse La Flair
Actor, Stuntman, Entrepreneur and the World’s most recognizable Pro Freerunner with over
30 million YOUTube Views, 80 million views and 1.5million followers on Tik-Tok.
Jesse began his career as a Freerunner and gained notoriety for his commercial appeal as a
fan favorite and Los Angeles Course record holder on NBC’s American Ninja Warrior. He was
soon hired as a stuntman on TV shows such as Its Always Sunny In Philadelphia, Hawaii
5-0, Magnum P.I, Shameless and Westworld. La Flair used this to segue into becoming a
stuntman and actor in hit Hollywood movies such as Divergent, 300 : Rise of An Empire,
TMNT , Marvel’s Captain Marvel and most recently as Kodi Smit Mcphee’s double as
Nightcrawler in Marvel Studio’s Dark Phoenix.
Jesse has appeared as an actor and stuntman in commercials for multinational corporations
such as Toyota, Asics, Hewlett Packard, Chobani, GMC and Microsoft.
Not only is Jesse an established actor and stuntman his portfolio of businesses makes him a
solid entrepreneur. He is an owner and a Pro Athlete of the world’s leading Freerunning brand
Tempest Freerunning, the Co-creator and Co-CEO of the Pro Freerun League, Prime Shop
LA, Freerunning Academy Online, Concrete Collective, and La Flair Apparel.
Carrie “Banshee” Bernans- Carrie is an award-winning actress and stuntwoman, Dancer, Martial artist and professional athlete.
Carrie speaks 6 languages. Learning Spanish as a child and picking up
Mandarin, Chinese, French, Russian, and Latvian in her late teens and early
adult years from immersive worldwide travel.
Carrie is most known for Marvel’s Black Panther, Marvel’s Avengers: End
Game, Lifetime’s Black Hearted Killer, CBS’s SWAT, CBS’ The Seal Team,
Quibi’s Reno 911 and her latest show FOX’s ‘ULTIMATE TAG’ which premieres
on May 20th on Fox
● 2 TIMES SAG AWARD WINNING STUNTWOMAN FOR MARVEL’s
BLACK PANTHER & MARVEL’S AVENGERS: END GAME
● 2019 NAACP AWARD FOR BEST PICTURE FOR BLACK PANTHER.
Me’Lisa “Lisa” Barber-
Me’lisa Barber  won her first major international championships gold medal by running 50.3 lead leg on Team USA’s winning 4×400 relay in 2003 with teammates Demetria Washington, Sanya Richards and the notable Jearl Miles-Clark World Outdoor Championships in Paris. In 2005, she was the U.S outdoor 100 m dash champion and the 4×100 relay Gold medalist in the World Championships, making her one of the only athletes to win gold medals in back to back World Championships in the 4×100 and 4×400 meter relays. Barber then became the indoor World Champion in the 60 m dash in Russia running a blazing time of 7.01 which is 4th fastest time ever ran in the world. Barber has been featured in magazine articles along with her twin Miki Barber in stories in USA Today, Track and Field News, Sports Illustrated Oxygen Sports, Fearless Magazine. Discussing the importance of education to young adults, giving them motivational tips on how to balance sports and academics.

Her nickname is Lisa. Barber majored in Retail Management and with a minor in Business at University of South Carolina.  Barber training for the 2021 Olympics and is CEO of TheHoneyCollection Jewelry Line.

Charlie White-
Charlie is a Former Division 1 soccer player that converted to beach handball after moving to Los Angeles and currently represents the USA in competitions around the world having medaled in the 2019 IHF NORCA Champions and is currently training for 2020. When he doesn’t have his feet in the sand , he’s a UX Designer launching products for millions of users in the gaming, travel, film, entertainment and cable industries.
Host: Alikona Bradford is also an Actress, Writer, and former Dancer and Makeup Artist with a background in fitness (Daily Burn Athlete) with training in tumbling, parkour, and martial arts, though wouldn’t dare face off with La Flair!! She is featured on episode 102 of Ultimate Tag and recently sold three feature films, one which is slated to film post COVID 19. She also completed two US tours and one World Tour as the Live Arena and Stadium Host for Monster Jam while also working with AfterBuzz TV on over 300 episodes.
Find our panel on social at:
Host: @UrsTrulyAlikona on Twitter @yours_truly_alikona on IG
Jesse La Flair @jesselaflair on Twitter and IG
Carrie Bernans @carriebernans onTwitter and IG
Lisa Barber: @Lisabarber80 on Twitter@honeybl on IG
Charlie White: @ charleswhite3 on Twitter @charlie_white on IG

IMDb: The competition intensifies as more contestants enter the arena to prove their athletic strengths.