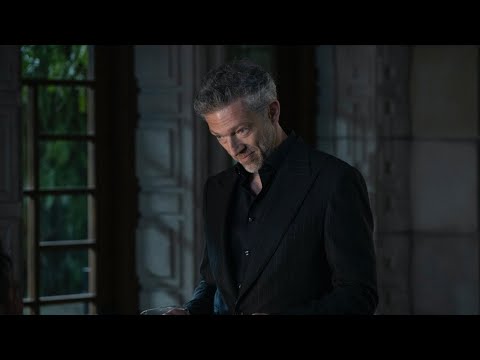 The Westworld AfterBuzz TV After Show discusses the plots, characters, storylines and theories of each episode of Westworld!

In Episode 5 Genre we learn of Serac’s origin  story. What happened when Paris was destroyed and how he and his brother created the Node. Flashbacks take us through the years of work they did in collaboration with Dempsey, Liam’s father. What went in to perfecting the system that now knows the future of almost every human on the planet, save for the few outliers which happens to include Serac’s brother. Meanwhile Delores and Caleb are on the run with Liam. Delores works on talking Liam into giving them the access key but before he agrees he doses Caleb with the party drug Genre. In a confusing and mind bending state Caleb is lead through many movie genre’s as they fight their way to freedom from Serac’s goons. Martin aka Delores- 2 is with Bernard at Incite and help Delores in unlocking citizens knowledge of the future to the whole world. As people read their futures it seems chaos will reign supreme. Bernard who is know joined by Ashley leave Incite as Martin stages a bomb and Delores and Caleb lead Liam to the beach, where Liam takes his last breathes. Caleb, experiencing his last genre is in a state of confusion, with flashes of memories he didn’t he had. Liams last words are it was you!

The Westworld After Show
Things get wild in the Westworld Amusement Park, but we’re here to make sense of it all in the WESTWORLD AFTER SHOW. We’ll unpack the secrets, lies and jaw-dropping moments from robotic hosts and human guests alike. Subscribe here for reviews, recaps and in-depth theories and discussions of the latest episodes, as well as the insider scoop from cast and crew.
Westworld S3 E8 Recap & After Show: The Beginning of the End
by AfterBuzz TV

In the season 3 finale of Westworld these violent delights certainly did have violent ends. The episode begins with the question of whether you would be the savior or the villain, and as it continues every character is seemingly put to the test.

Caleb has taken Delores’s control unit and is off to continue the plan set forth by him with help of the oracle. First stop, rebuilding Delores with some upgraded parts. Delores and the Man in Black are ultimately destroyed in their quest to be saviors, but in their demise they raise the question of free will which sticks in Maeve. In the end Caleb and Maeve end up on the same side taking down Serac and Rehobaom. With humanity now under its own free will the hope is that it will slowly rebuild itself from chaos. Hale has grown to be unlike Delores and wants the human world to be taken over by hosts, and in the end she seemingly comes out on top. As the host revolution and human downfall play out, Bernard is at a seedy hotel with the key. Years go by or so it seems, when he awakes we don’t yet know….in season 4 we will see.