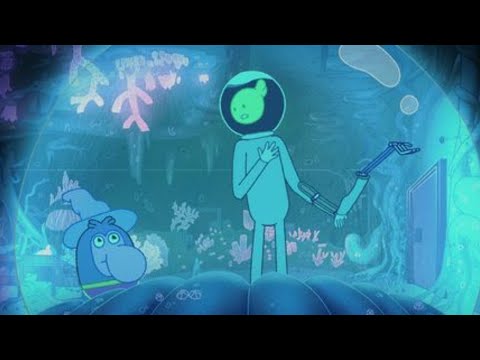 This trippy animated travel series asks the big questions of life but visiting planets on the brink of death. Join THE MIDNIGHT GOSPEL AFTERBUZZ TV AFTER SHOW as we explore a universe beyond the scope of life! Subscribe and comment to stay up to date.

In Episode 3 of this first season Clancy, (voiced by Duncan Trussell) the Podcaster from the Multiverse continues to ride the glorious wave of introspection, consciousness, manifesting inner peace & all that is divine. His guest is  Darryl (voiced by Damien Echols) who in real life was wrongly convicted of a triple child murder as a teenager & served 18 years before he was able to be released. Damien became a Buddhist while in prison.  This was a visual psychedelic trip with Darryl’s human body & a fish inside a fish bowl as his head taking Clancy on a tour of his planet where he schools him on words taking on currents & becoming spiritual sustenance, empowerment through Buddhist teachings and a fair share of F bombs sprinkled throughout.
Episode 4 follows the same direction of spiritual content with Clancy being introduced to the power of forgiveness, mindful meditation, the importance of listening and energy gathering for the GOOD. Trudy, (voiced by Trudy Goodman) the rose aka the knife aka the sword wielding badass on a horse is his guide & wastes no time taking him all up & through the kuhraaaazy planet of not-Mercurytaville. She schools him on Dharma teachings & what it means to be truly alive. Spoiler Alert: Being truly alive means that you always comes back to the art of breath & remaining centered & present.
I’m a HUGE fan of this show & the completely wicked  images, the dialogue & the engaging storylines are so visually stimulating & binge worthy! It makes my heart smile & I’m constantly rewinding to make sure I catch all of the fresh one liners & quick wit.  Also as a VO actor,  the absolutely superb delivery & performance art are EV ERRRR E THING! Check it out-you will NOT regret it.

The Midnight Gospel After Show Podcast
This trippy animated travel series asks the big questions of life but visiting planets on the brink of death. Join THE MIDNIGHT GOSPEL AFTERBUZZ TV AFTER SHOW as we explore a universe beyond the scope of life! Subscribe and comment to stay up to date.
'The Midnight Gospel' S1 E7 & E8 Recap & After Show: Hell in a Hand Basket
by AfterBuzz TV

Episode 7 of The Midnight Gospel takes place on Planet Blank Ball, though we end up interviewing Death inside of Clancy’s own satchel.  Death takes us on a journey through Clancy’s literal personal hell and teaches him, and us, how to deal with it.  In the season finally, Clancy talks with his mom about life: staying present, going with the flow, and the pain that is love.  Clancy’s dog saves his life as reality breaks.

Coping With Addiction During COVID-19 & A Girls Trip Quarantine Reunion...

How Halle Johnson is Surviving the Quarantine | AfterBuzz TV