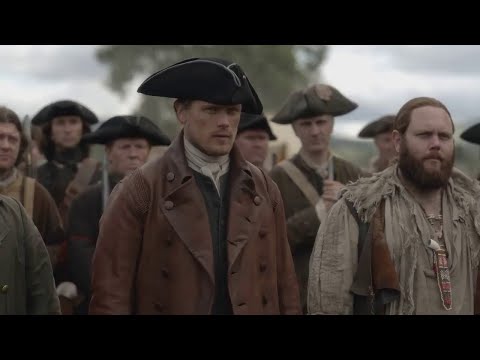 The Outlander After Show recaps, reviews and discusses episodes of Starz’s Outlander.

Before the Battle of Alamance, Brianna races into camp to warn Claire, Roger, and Jamie that this will be the battle that some historians consider to be the catalyst of the American Revolution. Jamie sends Roger to speak with Murtagh about this so that Murtagh might stop his troops from fighting. In the end, to Jamie and Roger’s dismay, the battle commences. Roger finds himself fighting for his life against his own blood, Buck, as the battle wages on.
In one of the most emotional moments of the show, Murtagh ends up dying, and Jamie brings him to Claire so that she might work her magic and bring him back to life. But Jamie quickly realizes he needs to come to terms with Murtagh’s passing.
At the end of the episode, Brianna, Claire, and Jamie find bodies that have been hanged. As Jamie reaches for the body who they believe to be Roger, the three brace themselves for the worst.

The Outlander Podcast
The Outlander After Show recaps, reviews and discusses episodes of Starz's Outlander. Show Summary: After serving as a British Army nurse in World War II, Claire Randall is enjoying a second honeymoon in Scotland with husband Frank, an MI6 officer looking forward to a new career as an Oxford historian. Suddenly, Claire is transported to 1743 and into a mysterious world where her freedom and life are threatened. To survive, she marries Jamie Fraser, a strapping Scots warrior with a complicated past and a disarming sense of humor. A passionate relationship ensues, and Claire is caught between t
Outlander S5 E12 Recap & After Show: A Spoonful of Hemlock
by AfterBuzz TV

With Claire kidnapped, Jamie races to assemble his men in search of her. Brianna and Roger’s attempt to think of home and go through the stone brings them full circle. Claire attempts to not let the trauma of the kidnapping break her, while Marsali makes a decision that she thinks is for the best of the Fraser Clan, but may have long term consequences.

Is Wrestlemania Going to Happen? – Recap & Review of WWE’s...
Scroll to top