In 1986 Terry Ilous moved to Hollywood and formed the metal band XYZ along with friend and bassist Pat Fontaine. XYZ released their debut self-titled album [produced by Don Dokken] in 1989 on Enigma Records; followed by the 1991 Capital release “Hungry” and “Take What You Want Live” in 1995. The band quickly gained attention selling over 1.5 million records world wide and played with artists such as Ozzy Osbourne, Foreigner, and Alice Cooper. Unfazed by changes in line-up and nearly a decade hiatus; XYZ consistently released albums over the following years with “Letter to God” in 2003, “Forbidden Demos” in 2005, and “The Best of XYZ” in 2008.

In 2007 Terry released his solo album “Here and Gone” performing the single “Got to Believe” live on the 43rd annual Jerry Lewis Telethon. Apart from singing live Terry’s had a busy career writing music for and alongside well known artists, appearing in cameos on the daytime soap “Passions”; and recording voice overs for an impressive list of companies such as Levis, Wrigley, Asahi, Toyota, WWE, Dr. Pepper, eBay, Columbia Picture’s “Stuart Little 2”, and Paramount’s “Rug Rats in Paris”.

Never one to sit idle, Terry’s been heavily involved in charity work over the years. He’s organized concerts like “80s Rockers for Japan” to aid victims of the 2011 earthquake and tsunami ,and appears at “Rockers 4 Xmas”, a yearly concert to raise funds for those in need over the holiday season. As rare as his free time is Terry donates as much of it as he is able flying to charity gigs, and co-writing / co-producing the charity single “One Family” [under the moniker United Rockers 4U]; which included an all star cast consisting of members from Quiet Riot, Whitesnake, Toto,L.A.Guns, Survivor, Poison, Lita Ford, and Eddie Money. 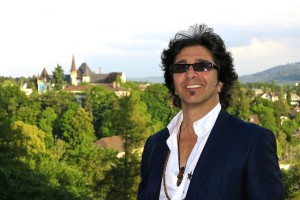 In 2009 Terry was contacted to play a handful of dateswith multi-platinum recording artists, and 80’s & 90’s rock icons, Great White. Still going strong after 30 years and one of the few bands of the era to still be consistently playing throughout the U.S and Europe; Great White made the line up change official in 2011 and immediately headed out on an extensive year long tour…

In 2012 Great White headed into the studio and released the album “Elation”, quickly followed by the live album “30 Years: Live from the Sunset Strip”. The positive response from fans and press alike was overwhelming; with 3 video releases, and the song “Hard to Say Goodbye” reaching number 8 on Billboards Classic Rock Radio Charts. Despite the state of the music industry and lack of air play for established bands Great White continues to tour with an average 60 shows a year alongside rock legends such as Vince Neil [Motley Crue], Quiet Riot, Queensryche, Twisted Sister, Ratt, Lita Ford, Stryper, Night Ranger, REO Speedwagon, Dennis De Young [of Styx], Skid Row, Warrant, Slaughter, and many others.

Currently Terry Ilous is on extensive tour with Great White across the U.S; playing everywhere from large arenas, state fairs, casinos, summer rock festivals, to intimate nightclub acoustic shows. Whether it’s touring with Great White, playing with XYZ, voiceovers, writing music, or playing a charity concert, one thing is for sure; Terry Ilous is an unstoppable force in the music industry with a powerful voice, a genuine love for his fans and no plans of slowing down anytime soon!