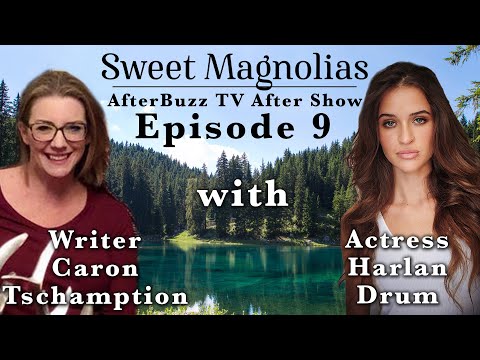 Sweet Magnolias: Episode 9: Where You Find Me

On the morning of the mock trial Kyle’s behavior worries everyone meanwhile Dana Sue meets a handsome farmer.

Kyle is devastated over his unrequited feelings for Annie and Noreen’s departure. On the morning of the trial he forces himself to go to school but goes missing instead sending everyone scrambling. Bill and Maddie are frantic and when Maddies tells Bill to ask Noreen if she’s seen Kyle, Bill tells her Noreen left him. Pastor June Wilkes finds Kyle sitting alone in church. Maddie arrives and he tells her how he feels like no one sees him and thinks if he disappeared how no one would miss him. Maddie is crushed that she didn’t see how much he was struggling.

Ryan comes to the rescue when it comes to Helen’s need for a co-op manager to take over the farm and keep it alive. Dana Sue heads out to the farm with Ryan to meet with the head of the co-op. She’s there to see what the options are and what the co-op can provide Sullivan’s. When she meets “farmer” Jeremy, the man running the co-op, nothing and no one is what she expected.

The mock trial competition goes on without Kyle with Annie filing in for Kyle and being grilled by Ce Ce on the stand. Ce Ce can’t stand seeing Annie and Ty talk and she takes it out on Annie during the trial. The competition goes well, in spite of Kyle’s absence. And Ce Ce gets the award for best defense attorney, making Helen and her father proud.

Cal stops by to check on Maddie, a little disconcerted by Bill’s presence earlier. Maddie makes it clear who she’s got her focus on.

Later, Kyle tells Ty that Noreen has left their dad. Helen and Annie come over and Kyle apologizes to them. While Helen, Dana Sue and Maddie ‘Pour It Out’ Annie and Kyle share being grounded and establish “they’re good.”

When Maddie tells Dana Sue and Helen that Noreen left Bill, they can’t believe it. Maddie says Bill actually stepped up when Kyle went missing and maybe he never did before because she never let him.

Helen and Ryan grow closer unitl she’s confronted with the one thing that could tear them apart.

Plus from the writer’s room, Caron Tschampion, and actress Harlan Drum (Ce Ce Matney) join the panel to talk about episode 9! Caron shares behind the scenes of what goes on in the writer’s room, how they brainstorm story and character, and Harlan shares her love for the character of Ce Ce and how she grew to really understand her.