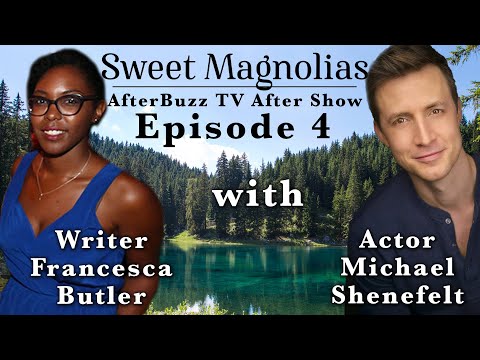 Sweet Magnolias: Episode 4: Lay It All Down

The town’s gossip mill starts churning over Maddie “canoodling” with her new friend, Dana Sue suffers a health scare and Helen’s past pays her a visit in the most unlikely way

A shirtless Cal outside of Maddie’s house has set the rumor mill in Serenity on fire! Cal airs his concerns to Maddie about all the talk in town, particularly because he doesn’t want anything to send Maddie scurrying in the opposite direction. Fortunately, Maddie’s gossip shield has been well honed over the years and she brushes the gossip off.  It’s clear she likes Cal and isn’t going to let gossip inform her feelings. It’s another story though when her son Ty gets wind of something abrew between the coach and his mother. He confronts her and she makes it clear that nothing is going on between her and coach Cal. And IF something does, Ty will be the first to know.

The pressures on Dana Sue reach a climax when she collapses in her kitchen in front of her staff and Helen. Chef Erik immediately goes into action, taking her vitals and telling a terrified Helen to call 911. Later at the hospital, as Erik waits on news, Helen comes out to tell him she’ll be ok thanks to him. When she asks Erik how it is he knows exactly what to do he brushes it off raising questions in Helen’s mind about Erik Whitley and his past.  Meanwhile, Dana Sue takes a hard look at her health and how she’s coping, or not coping, with the pressures in her life. Her daughter Annie is clearly shaken by the possibility of losing her mother and Dana Sue begins reconnecting with what makes her feel strong, which has always been cooking, while struggling to allow the people who love her to help her.

A tornado by the name of Ryan Whinset blows back into Helen’s life after a 14 year absence. Helen’s first love, and Francis Whinset’s nephew, has an issue with his aunt’s house being sold to Helen and the renovations to turn it into The Corner Spa. He’s flown from San Francisco to tell her in person along with possible legal action to prohibit her from doing further renovations. Helen is furious and goes toe to toe with him making it clear she won’t stand for him interfering when he doesn’t have all the facts. When Ryan’s aunt Francis calls him on his behavior it becomes clear that his returning to Serenity has nothing to do with her and the house and everything to do with Helen. A poignant moment between Helen and Ryan, in the house that holds memories of their blossoming love so many years ago, ignites the power of a first love; One that you never really got over and one that you never really let go of.

Be sure to check out the official Sweet Magnolias After Show hosted by:
Jaimi Alexander
Bryant Santos
Tami Goveia
Kelsey Meyer
After Show Playlist:
https://www.youtube.com/playlist?list=PL6THzna6gLceNzUJ6z6LnImLEp9hsDr-9

How Actress Fiona Vroom is Surviving the Quarantine | AfterBuzz TV