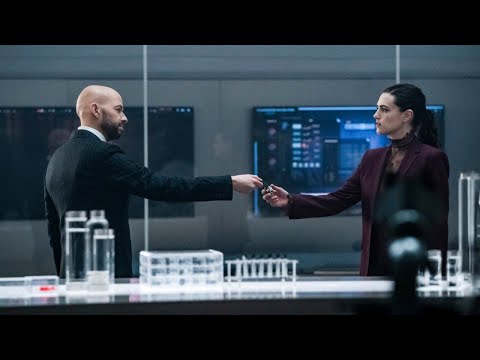 We’ve all heard of Superman but have you ever heard of Supergirl? Meet 12-year-old Kara Zor-El who escapes Planet Krypton to find protection and live a normal life on planet Earth.In the SUPERGIRL AFTERBUZZ TV AFTER SHOW PODCAST, we will discuss some of the best moments in the show while including recaps and in-depth discussions of the latest episodes with the insider scoop from cast and crew members.

On this weeks CW’s SUPERGIRL – SEASON 5 – EPISODE 17 – DEUS LEX MACHINA – Mellisa Benoist (Supergirl) herself’s directorial debut, we see Lex Luthor in all his glory.  Teased all season with Lex Luthor’s master plan and involvement since Crisis, we finally spill the tea on what has been Lex’s master plan.  Though between the long wait between episodes the confusing subplot heavy episode itself, it felt as if we had missed an episode in between.
We being the episode at the end with Lex Luthor having seemingly killed or murdered Margot, the administrative creepy old lady who was lurking around the bodies of those stuck in Obsidian Platinum.  Margot is a mid level administrative in Leviathan.  To Supergirl and Jon it seems as if finally Lex’s true evil colors are showing, as they get closer they realize the people feel saved by Lex.  Lex is a hero. Something he has been to the world in this newly created universe.
We are then taken to the beginning directly after the end of Crisis and finally get Lex Luthor’s side of things.  We revisit the family reunion Lex has with his mother, Lilian, explaining to her the collapse of the multiverse and in true Luthor fashion she takes it in stride, teaching him a lesson in moving on. The two conspire in regards to Leviathan, an organization Luthor seems unfamiliar with.  They discuss all the ways Luthor must stop Leviathan and put aside his grudge and obsession with killing Kryptonians, mainly Superman and of course our antagonist Supergirl.  Secondly they must reach out to team up with his sister Lena, who of course is so mistrustful of Lex that she killed him in a previous universe.  Lex uses his new found world to convince Lena to be on the same side.  He manipulates her with tasking her to be his partner in his plot to take down Leviathan.  Lena, still furious with Kara/Supergirl for betraying her falls into Lex’s plan.  The plan involves getting Leviathan to partner up and trust Lex enough that he is able to board their impenetrable ship and take them down from the inside.  To do so he will create a bug in Obsidian which we have seen previously with Richard Bates forcing users to be stuck inside.
In another part of Lex’s plan, we have Leviathan assassin Eve Tessmacher, who has been working for Leviathan under duress as they have threatened her family.  Lex reaches out a seemingly helpful hand to rescue her from her own conscious as Eve loathes being the Leviathan assassin.  Lex explains to Eve his plan to take down Leviathan, to protect her, and in a move to relieve her conscious kills her current intended target for her.  Through careful manipulative helpfulness, acts of seemingly caring, kindness, and protection, Lex manipulates Eve into helping him with information and acts to bring down Leviathan even going so far as to have Eve kill Jeremiah Danver’s (Alex’s father and Kara’s guardian) under the guise that he is the one who murdered Eve’s dad.  Through this time Eve develops feelings for Lex, which he silently seems to reciprocate.  At the last moment when Eve’s tasks are done and she cooks dinner to celebrate with Lex and expresses her feelings, Lex turns the tables and explains that he now holds the threat of killing Eve’s mother if she does not cooperate.  He states in the other universe his feelings for her distracted him and he will never allow them to do so again.  She is heartbroken and defeated.
We also see Lex Luthor manipulating Richard Bates, who we had previously seen Alex fight inside Obsidian for holding the man his wife was cyber cheating on him with.  We see a usually bald Lex dawn a wig and play a concerned bartender in order to convince Richard to program the bug and take action against this man.  We also see Lex give the idea to Brainy the only way to stop and the Q waves is by using Myriad.  This was in an attempt to create conflict between Kara and Lena again as the two had a heart to heart moment in regards to the passing of Kara’s father Jeremiah.
We also get a glimpse of Leviathan, and Leviathan’s head operative Gemma or Gammenae, the technology god.  We see Lex manipulate her by expressing he is trying to do whats best for Leviathan and Leviathan’s plans, including the killing of Margot.
Supergirl, Jon, and Jon’s cousin are seen stopping the beast who was unleashed to swallow the sun.  On Earth we see Kara go to the Fortress of Solitude to use Myriad.  We see Lena transport there and become aggressive towards Kara for using Myriad which she had promised never to do and was previously forbidden.
Finally we see all the parts of Lex’s plan in action.  However Lex could not let well enough alone as he uses the last coordinates of the transport to teleport himself to the Fortress of Solitude.  Thats where we end as we discuss all this and more on the Afterbuzz Aftershow.