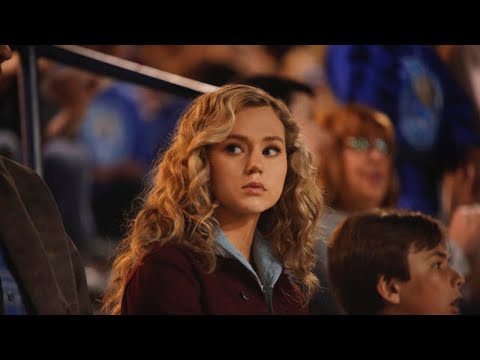 On this weeks RECAP:  DC’s STARGIRL – SEASON 1 – EPISODE 7 – SHIV PART 1 – Courtney needs to be part of the team, Cindy is so mean, and Barbara goes on a business trip.
We begin the episode in the hospital where Henry is still grieving over the injury of his father Brainwave.  Cindy comes to visit her boyfriend but really wants to plan for homecoming.  Henry is in no homecoming mood as he is gloom patrol because of his father.  Cindy feigns sympathy, however if she even has a heart it is not there.
The team walks into school with a new found confidence and zest.  As they hero walk in the halls, Cindy bumps into them and calls them all losers.  Cindy then bumps into the janitor and knocks his mop down.  Why is Cindy so mean, Courtney asks.  Most of the team responds she has always been, Beth points out she changed in elementary school when her mother died, and now has a second step mother. The ever empathetic savior, Courtney helps the janitor with his mop and decides to reach out and be friends with Cindy.  Before parting ways, the team enthusiastically decides to meet up for practice later.
Courtney first attempts to be friends with Cindy during Chemistry class.  Courtney partners up with a reluctant Cindy.  Cindy is a whiz at chemistry, which she attributes to her father the chemist who has a possible sadistic side.  Cindy, who has been negging the upcoming Homecoming dance since Henry does not want to go, asks Courtney to hang out the night of, instead.  Courtney, who has no plans, agrees.
Henry is not only grieving the injuries of his father but also the pains of his own blossoming mental powers.  He is hearing other people’s thoughts and is having a hard time filtering them, though he does use them to cheat on his math test.
At work Barbara is asked by her new boss Icicle to go on a business trip.  The trip seems ominous at best.
The team meets up for practice after school.  Pat has an instructional prepared and practice set up.  Courtney tries to jump ahead and constantly cuts off Pat.  Courtney then goes to show off and takes down all the set up.  Pat explains this wasnt just for her but the team.  The team is disappointed and Courtney’s actions show her lack of team work.
Cindy goes home after school and has an encounter with her Stepford Wife stepmother who is clearly afraid of the consequences of not listening to Cindy.  Cindy threatens her stepmother to bring her wine and cheese despite clearly being underage.  Cindy then goes to see her father, unannounced using the key code for a secret layer.  Her father, the Doctor of the Injustice Society is not at the table as Cindy eaves drops on the meeting overhearing some of the plan to take out Stargirl.  The Doctor/Dragon King catches Cindy and confronts her.  Cindy is clearly aware of her father’s role in the IJS and wants in.  She throws a tantrum and kills a minion with no regard.  Cindy has knives that come out of her skin, giving us the first hint she is superhuman.  Her father is dismissive and calls her his best experiment, showing no actual love for Cindy.
Cameron goes home and sees his father, Icicle.  Icicle, the villain yet amazing father, senses something is wrong and asks.  Cameron discusses being too shy to ask Courtney out to Homecoming.  Icicle, unaware Courtney is Stargirl, recounts a romantic story between himself and Cameron’s mom, how she had been waiting for him to ask her out.  This encouragement is advice for Cameron to just ask out Courtney.
Courtney, Pat, and Mike attend the Homecoming football game.  Courtney is paying attention to Principle Bowmen, who she suspects of being the Fiddler.  Mike is jealous of the attention Pat seems to give Courtney and vice versa.  He has also noticed they have been acting suspicious lately.  While Pat is getting concessions, Cameron musters the confidence to ask Courtney to the Homecoming Dance.  Courtney says yes, expressing she was supposed to hang out with Cindy.  She then tries to ask Cindy to hang out another day.  Cindy, feeling rejected, pushes Courtney away and says never again.
Courtney then follows Principle Bowmen to her office.  Principle Bowmen goes through a secret door.  Courtney suits up and follows.  Meanwhile Cindy has gone to her father’s lair but has no access.  When she sees an intruder she suits up in her father’s suit as well.  As Courtney is looking for Principle Bowmen she is attacked by Cindy in costume, but her face revealed.  The two fight.  Cindy reveals a super healing power when Courtney inadvertently burns her face with the staff.  Cindy gets the better of Courtney until The Janitor comes to her aid with a powerful sword.  The staff goes and finds Pat and brings him to the injured Courtney which sends Cindy away.  The Janitor int he background recognizes Pat.
All this and more on the Afterbuzz Aftershow.  Stay tuned.

On this weeks RECAP: DC’s STARGIRL – SEASON 1 – EPISODE 8 – SHIV PT 2 – Pat is in a car accident, the squad go on a mission, and Stargirl and Shiv rematch.

We start off with Barbara at dinner with her boss, unbeknownst to her Icicle. He leaves for a “business meeting” which turns out being him freezing a Waste Disposal former executive partly responsible his wife’s death in a revenge murder. Barbara gets a call that Courtney and Pat have been in a bad accident, as we watch Pat’s car careen off the road and into a pole.

At the hospital, Pat tells Courtney about the car accident. It is the cover for Courtney’s encounter with Shiv. Pat wants to tell Barbara the truth, but Courtney begs him not to. Courtney is worried about the mission and knows her mother will unallow it.

Cindy and her father Dragon King have a discussion about the events that transpired. Dragon King is not impressed and in fact is disappointed with Cindy, which seems to be his usual attitude. Cindy expresses she was successful, Dragon King is not happy with her actions and threatens to take his mask off as punishment.

Courtney is in bed after her injuries. Barbara seems upset at Pat, and blames him. Mike and Courtney revisit their brother/sister moment except this time it gets sentimental. Mike expresses regret for being jealous and says he is happy Courtney is his sister and Pat is her new dad. Pat has a similar heart to heart with the staff. He talks to the staff who does not respond. He expresses he wants Courtney not to get hurt. As Pat leaves to talk to Barabara the staff shines showing acknowledgment.

Yolanda, Beth, and Rick are not happy with what happened to Courtney. Rick is especially upset and throws a tantrum, however Beth is able to speak reason and says she has a plan. That day all three go over to Cindy’s after school and Beth goes up to the door. Pat shows up and goes with Beth. Cindy’s step mom Bobbie lets them in. Comedically, Pat and Beth fumble that he is Beth’s father and a mechanic. Beth uses her glasses to search the house while Pat stalls. Bobbie asks Pat to fix the plumbing and then comes onto him. Beth goes downstairs to the lair and then upstairs to Cindy’s room.

Henry is in his father’s den suffering from the onset of his powers. Unable to stand the pain he searches for ibuprofen and is able to manifest his telekenetic powers. He finds a key to his fathers closet lair. He finds a letter detailing Cindy is his detail and there to watch him.

Meanwhile. Cindy pays a visit to injured Courtney in bed at her house. Surprisingly Cindy apologizes for her attitude at the football game. She engages in girl talk as Courtney warily engages in return. Cindy seems sincere as she eats all the candy she brought for Courtney. As she leaves she casually mentions she knows Courtney is Stargirl, but wont tell her father. She then threatens she will kill of Courtney’s friends.

Courtney unaware of her friend’s whereabouts texts them Cindy knows her identity. Yolanda updates her on their whereabouts. Courtney then lets them know Cindy is on her way home. Cindy gets home while Beth is in her room. Beth tries to hide, thankfully Yolanda has dawned the Wildcat outfit and climbed the wall to the room. She takes Beth to safety in the nick of time. The friends and Pat make a hasty retreat.

Courtney on the other hand knowing her friends are in danger goes to get the staff. The staff will not go with her at first but then goes. Courntey gets to Cindy’s house and immediately attacks. Cindy and Courtney have another fight. It spills onto the streets. Henry shows up displaying his power and sens a brain shockwave that throws Courtney and Cindy. Cindy is halted by her father’s minions he send her to him. Henry is reading Stargirls mind and knows it is Courtney.

All this and more on the Afterbuzz Aftershow. Stay tuned.