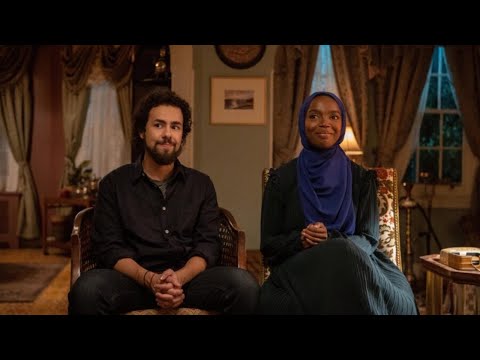 On this episode RECAP:  HULU’S RAMY – SEASON 2 – EPISODE 5 – ARIANA GRANDE, Dena takes center place as she has become the recipient of a full ride scholarship to law school, a fact she publicizes first on Facebook to the dismay of her parents.  Farouk and especially Maysa are worried that Dena will receive the Evil Eye and be jinxed.  Maysa tells Dena of Uncle Naseem’s bout with the evil eye which caused him great misfortune.  Dena, to modern to believe in such nonsense takes her parents warning with a grain of salt and is annoyed by their lack of enthusiasm for her.

Dena notices a strand of hair in her hand when she runs her hand through her hair.  She notices it more the next day in the shower after yoga class where many people congratulated her on her success.  She notices more at lunch with her friends who are also congratulating her which seems to be the evil eye taking effect.  Dena even notices a lump and seeks medical help.

Dena is concerned and goes to visit Uncle Naseem to determine how to rid herself of what she is sure now is the evil eye curse.  Uncle Naseem cryptically tells her to visit a mystic who can help her.  Once there the mystic is immediately off put by the energy of Dena’s misfortune as determined by the configuration of her turkish coffee fortune.  The mystic grabs a paper shaped like a person and pricks it several times with a needle stating the names of the people who ‘liked’ her facebook post.  The mystic then burns the paper and circles Dena’s head with sage reciting prayers and seance alike.  Once in the car again, the doctor from Dena’s check up calls to tell her the lump is a benign normal lump, Fibroadenoma.  Dena is relieved.

On her way home Dena’s car breaks down, which her father had mentioned for her the light check engine light was on.  Dena calls for a tow truck.  The driver gives Dena a ride home.  The driver, a Mexican naturalized citizen, makes a series of negative stereotype comments to Dena in regards to being Muslim and having her head covered.  After being attacked verbally by the driver for her insistence on wearing the scarf and maintaining her cultural identity, Dena has a justified meltdown and goes off on the driver expressing the headscarf is to cover her balding condition and dispels many of the negative things the driver says.  Dena tells the driver to pull over, let her out, and take her car to the shop without doing anything to it.

On this episode RECAP:  HULU’S RAMY – SEASON 2 – EPISODE 6 – THEY, we explore more of Maysa, the mother, as she is on her quest to become a citizen.  Maysa takes her studies and duties very seriously.  She reaches out to a lawyer who says her case seems like it will be “softball” a term she learns means very easy.

Her dreams come to a seeming halt in her mind when she is suspended by Lyft for an incident.  She calls Lyft frantically to find out what the incident is.  Not only does she want to work she also irrationally worry about her chances to become a citizen.  She expresses her frustration to Dena who is attempting to study for her new law school.  Dena tries to calm her mother down by explaining the irrationality, Maysa is not having it.  Dena tells Maysa to go over her day.

Maysa starts with many unnecessary details until she gets to the Lyft rides.  She remembers an asian young lady who she asked to help her with her citizenship exam.  She remembers an Egyptian doctor whom once Maysa finds is single she tries to set up with Dena in the humorously most horrible of ways.  She details each fare.  At the end she remembers a non binary passenger who she explained as a man dressed as a woman.  As customary, Maysa over expresses her opinions to her passenger who rebuffs her bigoted good intentions by asking not to speak.  Conservative Maysa has a hard time reconciling her nonbinary passengers lifestyle.  Dena immediately explains how prejudicial and rude Maysa’s reaction was.  Maysa asks Dena for help in tracking down this passenger so she can apologize and they can hopefully refute the complaint.

Dena does not help Maysa as she goes off on her own and waits outside the passenger named Sofia’s last drop off.  The wait takes all day into the night, finally Sofia exits with her friend.  Maysa follows them to a bar.  Maysa walks inside and sees Sofia’s friend get up to go the bathroom.  Maysa approaches Sofia, who after recognizing Maysa becomes slightly alarmed.  Maysa apologizes once again in a will intentioned albeit rude way.  Sofia gives an explanation of nonbinary and says they no longer wish to defend themselves.  Sofia also tells Maysa they gave Maysa a 4 star rating and was not the one to complain.  Sofia’s friend returns, and he is Sofia’s boyfriend.  He is aware of Maysa and the incident the day before and very upset by it.  Maysa admits to stalking the couple to which Sofia’s boyfriend calls the cop.

Dena comes to Maysa’s rescue and explains the situation to the cops.  The couple is not pressing charges.  Dena and Maysa have a harsh heart to heart in which Dena tells Maysa she is rude not honest.  Dena also expresses how her mother has been very rude to her in the past.  Maysa expresses her love and pride for Dena and not wanting her to make the same mistakes Maysa has made.  Dena seems to have gotten her point across until Maysa ends by saying lets go find the “asian girl” to fix this.

All this and more on the Afterbuzz aftershow.

Labor of Love S1 E2 Recap & After Show: Look out for the Bear!