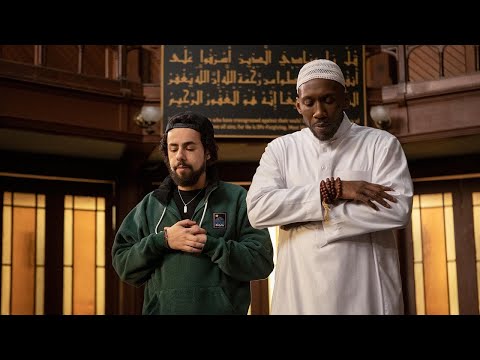 On this episode RECAP:  HULU’s RAMY – SEASON 2 – EPISODE 3 – LITTLE OMAR, Ramy, Sheikh Malik and the mosque’s congregation are at the hospital praying for the beaten protestors life.  The protestor, Nico, has been beaten to an inch of his life and is currently close to brain dead.  Ahmed is one of the attending doctors.  Dena is at the hospital and develops a little crush on the handsome Sheikh Malik.  Zainab is fully aware of Dena’s actions and intent.

Ramy, Sheikh Malik, and Zainab go to see patient Nico.  Ahmed warns of his current state with Ramy being  sensitive to these things.  Nico’s brother Ron is there.  Ron admits to at first hating the congregation but now coming to terms with them while accepting and appreciating their prayers.  Ron says unintentionally disrespectful statements to Zainab, who easily brushes them off and responds very respectfully.  Sheikh Malik prays for Nico.

The conversation of discipline in Islam comes up again on the quest to find the dog.  Ramy and Sheikh Malik have a conversation regarding if the dog is ‘haram’, or forbidden in Islam.  The Sheikh points out nothing is haram in Islam, our actions with what we do with them are.  Sheikh Malik explains Islam is ‘like an orange, there is an outer part, and an inner part.’  The outer part being like the rules and rituals, which if relieved only would make you think it bitter.  The inner part being a divine intimacy, a spiritual experience.  The outer laws protect the inner spirituality and vice versa.

Nightfalls and Ramy and Sheikh Malik have yet to find Boomer.  Sheikh decides to prayer right there on the spot.  Ramy hesitantly agrees as it is cold and they are outside.  The two pray and upon ending the prayer they hear a dog bark, it is the car with Boomer inside.

Freeing Boomer and on the way home, Sheikh Malik confronts Ramy about lying to him.  Malik states it is his fault for giving Ramy too much too soon.  He now places a new teacher upon Ramy, the dog.  The dog has nothing but love and honesty.  Ramy is confused but is now in charge of the dog.

On this episode RECAP:  HULU’S RAMY – SEASON 2 – EPISODE 4 – MIAKHALIFA.MOV, Ramy having lost funding for the mosque due to bad publicity from Dennis’ attack on Nico wants to help Zainab get the funding back.  A news reporter expresses the vicious Muslim attack on the innocent protestor in a commentary on how the news twists story to serve their narrative.  This has dismayed a huge pledge from an Emirate Prince to the Mosque.  Under the guise to be a translator with his knowledge of Arabic, Ramy maneuvers Zainab into letting him go.

Ramy’s friends give him advice on how to handle the ride alone with the Sheikh’s daughter.  The debate Quran reciter.  In the car Ramy offers to play Quran, which Zainab turns down and says she would rather go in silence.

The Emirate’s residence is the Bin Khaled Estate, an over the top domain and mansion with security.  Ramy has a hard time understanding the Arabic, as his Arabic is conversational mostly and a different dialect.  At the door of the actual residence, Zainab asks Ramy for a motivational speech.  Ramy simply says “Just do it”.  Zainab ridicules the lack of enthusiasm and they go inside with Boomer who Ramy had to bring along.  Inside they are greeted by a parrot and a huge manor.  Upstairs they find Prince Abdula Bin Khaled who is every Emirate stereotype.  Leaving the Prince is former pornstar Mia Khalifa who Ramy immediately recognizes.

When learning Ramy’s name which means “archer” in Arabic, the Prince takes Ramy and Zainab to an archery range in his field.  There he proposes if Ramy hits the target and is a natural archer the Prince will simply give them the money, however if he misses the Prince wants Boomer in return.  Ramy refuses.  The Prince then offers the funds in direct exchange for Boomer, which Ramy refuses as well.  The Prince offers Ramy a practice shot for the original offer, which Ramy takes and gets a bullseye.  Excited, the Prince reminds Ramy that was simply a practice shot.  On taking the real shot, Ramy misses badly.  The Prince ready to take possession of Boomer is refuted by Ramy who calls him his “brother” and reminds him he is buying his way into Heaven by giving them the funds.  When told the request is only for $2 Million dollars he easily does so repeating Ramy is his “brother”.  Zainab blames Ramy for the predicament to begin with but is impressed Ramy was able to get it done.

Back in the presence of Sheikh Malik, who believe the two would fail Ramy learns of Zainab’s intentions to like Ramy and allow him to court her.  Sheikh Malik is not as happy about this however knows his daughter has a strong will and will do as she pleases.  A possible romance is on the horizon.

All this and more one the Afterbuzz aftershow.