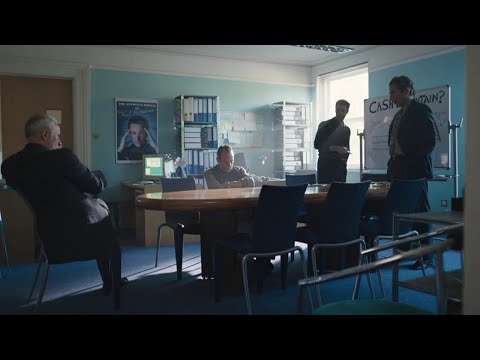 This show poses one big question: Do you think they did it? Join us on THE QUIZ AFTERBUZZ TV AFTER SHOW PODCAST as we follow each episode of Quiz, diving into the mystique of the game show world. Dramatizing the events surrounding the appearance of Charles Ingram on the original, British “Who Wants to Be a Millionaire?,” Quiz has us on the edge of our seats. Every week we’ll break down the episodes and provide insight into the storylines and character plots. Subscribe to stay up to date on all things Quiz!

In this first episode, we see the the true story of the creation and evolution of the British TV show “Cash Mountain,” as it becomes what is known around the world today as “Who Wants to Be a Millionaire.”
The episode begins in a courtroom, when we first meet Charles and Diana Ingram and learn that they are on trial for cheating on a TV quiz show. We then begin the series of events that unfolded that brought the Ingrams to that day in court.
We meet Diana’s brother, Adrian, who is determined to compete on “Who Wants to Be A Millionaire” in order to pay off deep debts he has incurred. He meets a man named Paddy Spooner who introduces him to a network of quizzers called “The Syndicate.” They have figured out how to work the game system and are willing to help him for 25% of his winnings.
Adrian decides to go it alone, creating a “Fastest Fingers First” machine to practice on at home. The practice pays off, and he ends ups making it to the Fastest Fingers Round of the show 4 times. His final time competing, he makes it to the main chair to win $32,000.
He lets his sister know about the machine he created to practice, so she uses it and also makes it onto the show. She ends up winning  $32,000 as well.
Adrian lets Diana and Charles know that he has to skip town because he did not win enough on the show to pay off his debts. Even with some of Diana’s winnings that she gives her brother to help, it is still not enough. Diana decides that it’s time for her husband to compete on the show to help her brother. Charles is not aware that Diana has made this decision for him, until he receives a call from producers of the show.
The episode ends with a shot of Charles in the main chair, as a contestant on Who Wants to Be a Millionaire…. We will see how it unfolds in the next two episodes.
This Show Was Hosted By :  Mina Naidine & Lisa Masi
6/1/2020