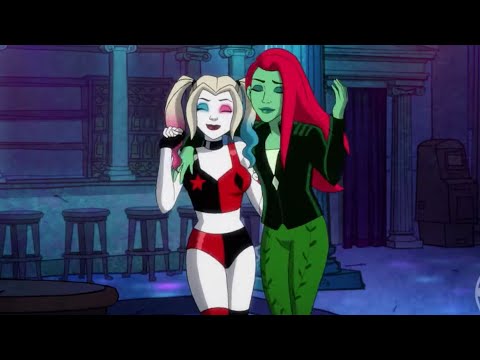 Coming back from our mid season finale DC’s HARLEY QUINN – NEW GOTHAM – SEASON 2 – EPISODE 1 starts off with a recap from Poison Ivy herself in which we learn it has been 3 weeks since Harley took down Joker, theres no Legion of Doom and no Batman. To which Ivy advises Harley that Gotham is Harley’s for the taking. In fact Gotham City has been disowned by the United States. Waiting for these 5 star sushi from the chef Harley has just kidnapped, Harley decides to take this opportunity to liberate all the henchmen. Harley does not want to rule, she thinks Anarchy is best. Ivy waiting for her “I told you so” moment disagrees with Harley however Harley has already convinced all the henchmen and goons to be their own bad guy. Many emulate the villains we are familiar with. On the other side of town, after their henchmen turn on them, the remaining supervillains Penguin, Mr. Freeze, Riddle, Two Face, and Bane start their own organization the Injustice League. They carve up a New New Gotham, giving the smallest piece to Harley.

Harley attempts to stop them but is frozen by Mr. Freeze. Meanwhile Gordon tries to search for Batman who also goes missing in the downing of Joker’s building by Harley. Robin shows up in Batman’s uniform but he is no Batman. Gordon loses control of the police force as they become the Bane Boys on their own. There seems to be no hope. Ivy and the team rescue Harley from being a frozen statue in Penguin’s casino. Harley kills Penguin in a fight and is free. She learns it has been two months since the Injustice League meeting. Gotham is not the Gotham she knew. In another part of Gotham, Bruce Wayne has been recovered from the rubble.

We discuss all this and more on this weeks DC’s HARLEY QUINN – NEW GOTHAM – SEASON 1 – EPISODE 14 Afterbuzz Aftershow.