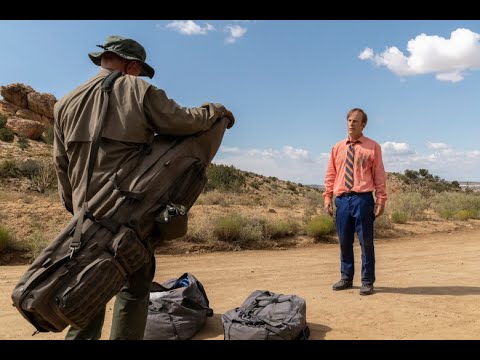 Things are really getting tough for Slippin’ Jimmy as we head into Better Call Saul! If you’re not up to date, catch up! This show is amazing; and we’re here every week to talk about it on the BETTER CALL SAUL After Show! How will we end up where Breaking Bad Begins?! Where’s Kim!? What is Mike going to do next? Join us weekly for predictions, discussion, analysis and guest interviews! Subscribe and comment for a shout out and make sure to stay tuned for all the news and updates on the show!

Tonight’s episode of Better Call Saul had a simple plot and simple title: “Bagman”. Lalo asks Saul to go retrieve his $7 million at the Mexico border (31.6 miles near a well to be precise) and pick up the money from Lalo’s twin cousins. Saul agrees to pick up the money for $100,000. At home, Saul (Jimmy) tells Kim about the pick-up and she tells him “I don’t want you to do it”. Saul hugs Kim goodbye and tells her everything will be fine.
CUT TO Saul at the well. The cousins show up, drop the money in two bags at Saul’s feet, and leave. While Saul is driving back singing a version of “99 bottles of beer on the wall” and being pulled over by other members of the cartel. Held at gunpoint it feels like the men are going to take the $7 million, until Mike comes to the rescue- shooting all but one man. The one man escapes in a red truck.
Unfortunately, both Saul and Mike’s cars were hit in the shootout and are not drive-able. Saul and Mike have to walk back on foot 31.4 miles carrying the money! All the while, the red truck is driving around like a vulture scouting prey.
Meanwhile, Kim goes to speak with LALO because Saul never made it home. Lalo learns Kim is married to Saul and she is officially “in the game”.
Saul and Mike continue to walk and Saul eventually gives up. He can’t take it. He grabs a reflecting object and runs straight at the red truck scouting as Mike SHOOTS the driver dead. They live to fight another day and continue their uncertain trek.
This show was hosted by Ryan Nilsen, Sean McHugh, Gabbi Castinia, and Loren Kling!

The Better Call Saul Podcast
Things are really getting tough for Slippin' Jimmy as we head into Better Call Saul! If you're not up to date, catch up! This show is amazing; and we're here every week to talk about it on the BETTER CALL SAUL After Show! How will we end up where Breaking Bad Begins?! Where's Kim!? What is Mike going to do next? Join us weekly for predictions, discussion, analysis and guest interviews! Subscribe and comment for a shout out and make sure to stay tuned for all the news and updates on the show!
Lalo Unleashed! – S5 E10 ‘Better Call Saul’ After Show with Patrick Fabian
by AfterBuzz TV

On the season 5 finale of Better Call Saul…. A…. LOT… HAPPENED. Jimmy tells Kim that he doesn’t think he is “good for her”, but Kim thinks otherwise. After Lalo drives away, Jimmy and Kim go to a hotel because they do not feel safe at the apartment. The next morning Kim decides to go to work against Jimmy’s discretion. Kim wants to work on all of the hardest cases and gets access to the backlog file room of cases. She fills a box with case files and goes to the elevator and runs into Howard Hamlin. Howard introduces Kim to the people he is with and learns that she has left Mesa Verde. Howard follows Kim and shares with her the horrible things Jimmy has been doing to him these past couple of weeks. Kim takes the news with laughter and is insulted by Howard’s “attempt” at digging at Jimmy. Kim goes straight home to find a solemn Jimmy. Earlier, while Kim was at work, Jimmy went to visit Mike to get answers. Mike calms Jimmy down and informs him that Lalo is going to be killed tonight. Jimmy exhales and heads home. Once Kim and Jimmy meet at the hotel Jimmy is ashamed of any danger he put Kim in, but Kim tells him about the encounter with Howard and she starts playfully plotting terrible things to do to Howard! Jimmy plays along and Kim raises the bar to something unforgivable and alludes to threatening Howard with misconduct. Ironically, Jimmy is surprised by this and tries to talk Kim out of this but she appears to be all in.

Meanwhile, Nacho has driven Lalo to Mexico where we meet Lalo’s family. Nacho is in really deep and is very uncomfortable. There’s little to no cell signal and Nacho checks his phone every chance we get. At a very familiar swimming pool, Nacho meets Don Eladeo and they talk business. It goes well. That night Nacho is informed from an unknown number that there will be an extraction team at 3AM invading the compound to eliminate Lalo. Nacho heads out but meets Lalo at a campfire and have a drink. Nacho realizes that this ishis only chance, so he goes back inside and starts a small fire in the kitchen. He goes back out and Lalo notices the smoke – drawing Lalo away. Nacho opens the back gate and the extraction team enters guns and all. A shootout ensues and Lalo miraculously survives but his entire family has been killed. The season ends with an enraged Lalo running off the compound having killed all of the assassins.