How Singer/Actress Ainsley Ross is Surviving the Quarantine | AfterBuzz TV 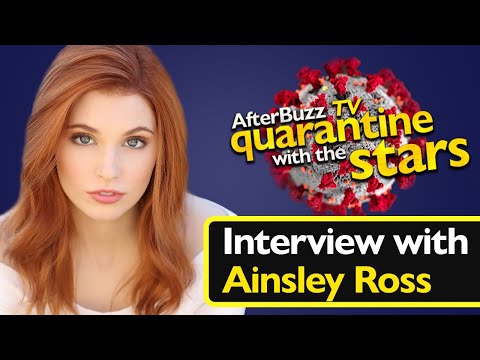 Actress/Model/Martial Artist/Singer/Lifestyle Influencer/Writer/Director/Seven Lions Cover Model Ophelia She was cast for the music group Seven Lions(IG 234K) music video as Ophelia, the band liked her character so much they choose to name their new record label after it. She performed all her own stunts in the music video. https://youtu.be/1qtDEXWNgcs She is known for her appearances in both feature films and television series’, She is best recognized for having starred as Mia Hill in the television series Should I Do It? Should I Do It?| Teaser Trailer [HD] | (2019): https://pro.imdb.com/videoproembed/vi2535832089 She is also known for having appeared as Jasmine in the feature film Small Things, Isabella Santiago in College Bound: Window of Hope, She was also in The Reins Maker, did her own stunts, and did the voice over for this project and plays the lead(Iris) in SYFS’s fan fiction favorite Expiration Date – Bring Them Down https://youtu.be/ZyabaKDGaTE She is also a Christian pop artist/musician and songwriter and is known for having written several songs for the film “The Reins Maker”. https://www.youtube.com/channel/UC0YDyDI0xj–T8qtWsvvglw She is very compassionate and loves using her platform for helping others, supporting charities and volunteering at places like the LA Mission, Cinderella, and Prince Charming events. The Cinderella and Prince Charming event for an example give Prom dresses and suits, to kids who don’t have the money to afford a Prom dress or suit… I encourage you to be a part of something bigger than yourself. She has supported organizations such as AMB(see video) https://youtu.be/YJRN_9PGyV8 She also is a professionally trained martial artist. Doing my extreme martial arts, and working on sword routines. About: She was born in a small East Texas town with a population of less than 800. From the time she could talk she has had a passion for entertaining and encouraging others. She started acting in a small town community theater when she was 9 along with writing music. By the young age of 14, Ainsley Ross had written over 80 songs. Ainsley’s first project was a feature film working with Fire Catcher Productions in a supporting role as Annie Ross in The Reins Maker. She wrote and performed music for the films soundtrack as well. Traveling is a passion of hers and she feels so fortunate that it goes hand and hand with the career path she is passionately pursuing. She loves spending time in L.A. and studying with some of the greats:) In her spare time Ainsley is a mentor and a public speaker, encouraging our youth to “Just Be You” (also the title of her first CD released in 2015) https://instagram.com/ainsley_ross?igshid=19nf6jt3dzgtj (followers 73K) Website https://ainsleyross.com/ IMDb http://www.IMDb.me/AinsleyRoss

Quarantine With The Stars
Quarantine With The Stars is your chance to get up close and personal with some of your favorite Hollywood actors, directors, producers, and writers to find out what they’re really doing behind the scenes while we all hunker down amidst the pandemic! As the famous phrase goes: “stars, they’re just like us,” and this time, it’s true! What series’ are your favorite actors watching? Are they still keeping their craft as we all play the waiting game? And what can we be looking forward to once the world settles back down? Tune in EVERY DAY, LIVE, to hear from your favorites, here on AfterBuzz TV.
How Temptation Island's Javen Butler & Shari Ligons are Surviving the Quarantine | AfterBuzz TV
by AfterBuzz TV

Host AJ (@crimsonPEARL) checks in with Temptation Island’s favorite couple, Javen Butler and Shari Ligons. Find out what the couple has been up to while in Quarantine and if they have tied the knot yet.

Insecure S4 E6 Recap & After Show: It’s All About Molly!