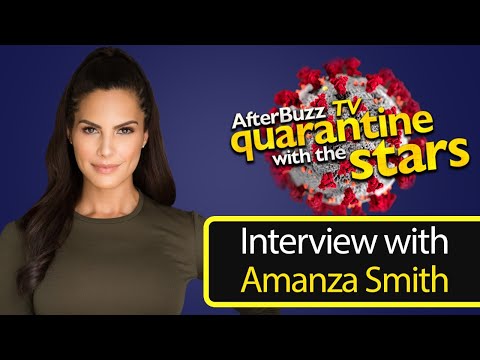 Amanza Smith may be the new agent at The Oppenheim Group, but is not the new girl to the team. Being best friends with Jason, Brett and Mary for over 18 years, Amanza is the one who introduced Mary to Jason. Their friendship is what drew Amanza to the cast of Selling Sunset. A single mother of two, Amanza has a unique perspective that sets her apart from others. Loyal, kind and strong, she does everything to provide her children with the best lives possible. Amanza’s down-to-earth personality demonstrates that she is authentic and relatable. She was born in Mt. Carmel, Illinois, and grew up in Vincennes, Indiana. Although she had a very humble upbringing, Amanza experienced a difficult childhood. Coming from a blended family, Amanza had an upbringing that was filled with obstacles to overcome, she was often teased for her skin color and hair. She never thought of herself as the “pretty girl,” and as she matured, learned to not take herself too seriously and to turn those struggles into strength. Amanza studied interior design in college and then at age 24, she moved to Los Angeles to pursue her dreams. Her successful modelling and performing career included being a professional cheerleader for the Indianapolis Colts and one of the models on NBC’s Deal or No Deal. She married her now ex-husband, former NFL player Ralph Brown, in 2010. To make ends meet after her divorce, Amanza did everything from cleaning houses to walking dogs to retail and babysitting. Although making money was a struggle, Amanza says that having kids is the highlight of her life so far. Her children are now 9 and 10. Amanza used her passion for her children combined with her love of interior design to do children’s rooms until she made enough contacts to start a small business interior design business, that she has single-handedly grown into AmanZa LLC a now thriving design and furniture business. This year she also accomplished getting her real estate license and becoming an agent, she now works with The Oppenheim Group as a design specialist, staging many of their multi-million dollar properties. One month into filming Selling Sunset, her ex-husband suddenly disappeared, which forced Amanza into fully caring for her children on her own. Dealing with this major emotional life-altering event made everything more stressful on and off camera. Amanza’s favorite part of filming was sharing the experience with her best friend, Mary. As they have been through everything together, it was surreal for them to do the show together. Amanza recently started designing custom furniture and hopes to create her own line of home goods. She aspires to have her own show on a major network based on design and helping others. Amanza enjoys dancing, singing, painting, making DIY crafts and listening to self-help audiobooks. Sure to be a fan favorite Amanza is the lady everyone wants to be best friends with.

AfterBuzz TV Host Jane Johnsen (@JaneJohnsen_) sits down with Amanza to learn all about the behind the scenes drama that we didn’t see on screen, what it’s like to be one of the top real estate agents in the Hollywood Hills, and her plans for the future.