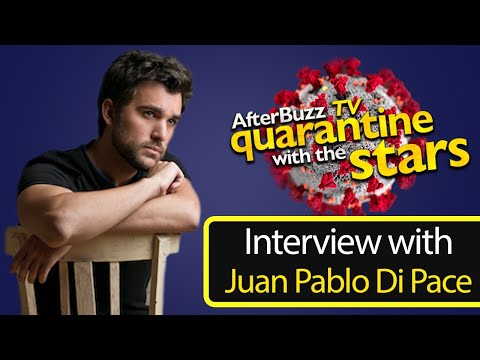 Juan Pablo was born in Buenos Aires and is an actor, musician and director. He has lived in London, Trieste, Madrid and currently resides in the US. He is best known for playing the role of the passionate Fernando on Netflix’s Emmy-nominated Number 1 show “Fuller House”, which has won “People’s Choice”, “Kids Choice” and “Teen Choice.” He is famous for portraying the role of Jesus Christ on “A.D. The Bible Continues” (2015) produced by Mark Burnett and Roma Downey for which he won a GRACE Award for “Most Inspiring Performance” in 2016, for the role of self-made billionaire Nicolás Treviño on TNT’s reboot of “Dallas” (2014) and for his appearance in the movie “Mamma Mia” (2008) as Colin Firth´s love interest, Petros. Di Pace has made several appearances on British television, such as BBC One comedy “The Catherine Tate Show” and BBC One film “Aftersun”, and in Spanish television, such as “Supercharly”, “Angel o Demonio”, “Los Hombres de Paco”, “El Don de Alba”and “Física o Química”. On film, he starred in “Survival Island” (2004), “Tutti Intorno a Linda” (2006), Fuera de foco (2011) and “After The Reality” (2016). Juan Pablo has an extensive live theatre background. In 2017, he premiered his solo show “An Evening with JP” in New York’s 54 Below, which he brought back to New York´s this last January 2020 at Green Room 42 to rave reviews and sold out houses. In 2018 he headlined a 3,000 people concert entitled “The Music of George Michael” with The Houston Symphony´s 70-piece orchestra. His one man show “Primer Acto” was nominated for best One Man Show at the BroadwayWorld Awards and won the Butaquita Award for best One Man Show (Madrid, 2013). Juan Pablo has had an extensive musical theater career, dubbed Spain´s “original male triple threat”, starting with Bob Fosse’s musical “Chicago” in London´s west End, and then starring in “Grease” as danny Zucco (Italy, 1999), Tony Manero in “Saturday Night Fever” (Madrid, 2009-2010) and Juan in “Más de 100 Mentiras” (Madrid, 2012). As a filmmaker, Juan Pablo has recently created “MINUTIAE” a web series in confinement about the “minutia” of life, with weekly premieres on his YouTube channel where fans can watch live every thursday at 2pm PT / 5pm ET. Guest stars include Andrea Barber, Soni Nicole Bringas, Jack Plotnick, Victoria Di Pace, Justin Root, Adam Hagenbuch. He has written and directed several short films including “La Belleza”, “Venki” ,”Admission,” “Ellos Dos” and the feature film “New Boy.” Juan Pablo is developing two feature films with his long time collaborator Andrés P. Estrada. In Music, Juan Pablo has released the singles “Broken”, “Just A Feeling” and “Sunrise, Sunset” (2018) worldwide and is currently finishing his upcoming EP of new original songs, including “Moonchild,” “Be Ready” and “Without You” co-written with Nick Gale (Dua Lipa). In 2013 he released his debut album “Primer Acto” (2013) and in 2010 he had a number one hit “We Wanna Rock” in Europe. He has worked with Diane Warren, Desmond Child, Nick Gale, Daddy Supreme, Joshua Olsen, Michael Franklin, Jeffrey James, and Kole among others. He has played sold-out shows in New York, Houston, Los Angeles, Buenos Aires and Madrid.