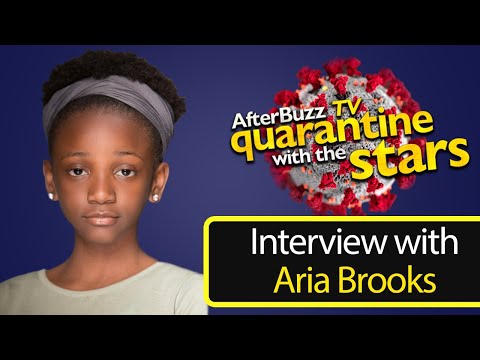 Aria Brooks was destined for a career in entertainment. Born in Atlanta Georgia as the daughter of two Performing Arts educators, she began singing and dancing at a young age. Soon, she could be seen showcasing her talents in local musical theatre productions. At the tender age of 10, Aria made the decision to pursue acting as a career path and shifted her focus to TV and film projects. At 13, Aria is quickly establishing herself as a powerhouse in the industry. She was seen on the big screen with a pivotal role in the award-winning film Harriet. She played Anger, the niece of Harriet Tubman, who is part of the group she comes back to save. The all-star cast also includes Cynthia Erivo, Jennifer Nettles, and Leslie Odom Jr. Aria also brought her talent to television with a guest-starring role as Nola in the anthology series Dolly Parton’s Heartstrings. Each installment tells an inspirational story based on the singer’s song catalog. In Aria’s episode, her character has a dog that reminds Dolly of her childhood furry companion, Crackerjack. The show is streaming now on Netflix. Other onscreen credits include Saved in the City and Nocturnal just to name a few. Aria’s breakout role came when she landed a spot as the newest series regular cast member on Nickelodeon’s All That, a reboot of the classic 90’s comedy series. Known as the network’s version of Saturday Night Live, the hit show allows Aria to hone her comedic talent alongside original cast member Kel Mitchell, who also serves as an Executive Producer. New episodes are airing now. When she is not filming, Aria enjoys creating her own content. She is an accomplished writer who has penned her own short film as well as a television series that explore the ups and downs of friendship. Aria also loves to sing and perform. She has written and produced two singles “Truly Me” and “Time Off.” The videos are available on her YouTube channel. Outside of acting, Aria loves to keep busy. In her spare time, she enjoys baking, doing crafts, filmmaking, making TikTok videos, and recording content for her YouTube audience. She and her family are also passionate supporters of the Kilgore Music Foundation, founded by famed saxophonist Ryan Kilgore, that aims to mentor, teach and inspire children to be lifelong musicians. Aria currently splits her time between Los Angeles and Atlanta, where she lives with her parents and younger sisters.