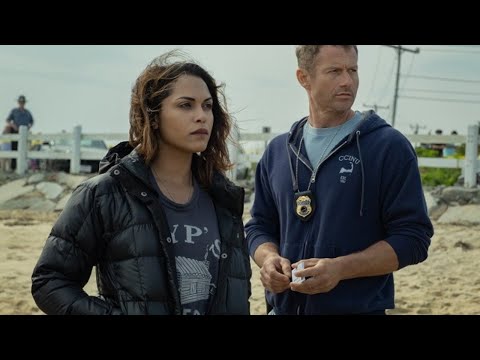 One woman’s life of boasting her authority to seduce women is interuppted when a murder pulls her into the middle of Cape Cod’s heroin epidemic. Join us on the HIGHTOWN AFTERBUZZ TV AFTER SHOW PODCAST as we dive into the seedy side of beautiful Cape Cod. Subscribe and comment to stay up to date.
Hightown opens up on two friends waiting in their car on a rainy night to pick up some drugs. Before we are given much else we get our victim of the season because Sheri is shot almost instantly as she meets her “drug dealer.” Two guys roll her up and drive away not knowing that there was actually a witness, Sherry’s friend Krista who was in the car but stepped out to pee in the bushes moments before Sherry was shot. L This is the beginning of what seems to be a crazy and twisted crime by some amateurs because Sheri’s body comes to shore and is found by Jackie Quiñones, played by Monica Raymund. We quickly find out that Jackie loves to party and live her life on the edge while also working as a service officer for the Marine Fisheries department. The death doesn’t seem to affect her too much or that’s the vibe she gives as she’s talks to Detective Ray Abruzzo played by James Badge Dale. Unfortunately for Ray, Sherry was his informant and he quickly took action to find out who killed Sherri by visiting an inmate by the name of Frankie Cuevas who he thinks may be involved or at least had an idea of who’s involved. And Detective Ray doesn’t stop there, he even visits Frankie’s baby momma. But it turns out that Jackie may have been more affected than we thought about the murder because she goes out for a fun night to forget what she saw and loses control. Not just of her mind but control of the car and crashes. Jackie, under the influence of alcohol and cocaine is now possibly facing a felony because she had a passenger in her car. In order to help her sentencing she unwillingly goes to rehab. We see her spiral out again but also seems to gain a sense of reality and what she needs to do. As we get the last shot of Jackie in her first AA meeting we see a shot of various peoples photos who have been to this rehab center and we see Krista. Clearly, this is only the beginning.