After recovering from a near-fatal accident and walking 25 stories over Times Square, high wire walker Lijana Wallenda shared her advice on facing fears on Ten Minute Talks with Meagan Lynn.

Imagine being 25 stories over Times Square in New York City, with only a wire thinner than the width of your feet supporting you. Only two people have experienced this: Nik and Lijana Wallenda. Those are the words Lijana spoke when she was walking that wire.

“The first step on the wire was–I’m not going to lie–it’s scary,” Lijana said on Ten Minute Talks with Meagan Lynn. “I know I do these things that seem impossible to people, but I am human, and there’s still that fear sometimes at the beginning.”

Lijana is no stranger to walking the wire. She and her brother Nik are seventh generation members of the famous Flying Wallenda family, who are considered circus royalty for their death-defying performances. But for Lijana, walking over Times Square required an extra amount of courage after surviving a near-fatal accident.

Lijana and four of her friends and family members barely survived falling off a wire while practicing to break a world-record eight-person pyramid in 2017. Lijana sustained the worst injuries of them all, breaking all of the bones in her face among other serious injuries in her arm, foot, ribs, liver and ear.

“From the minute I was falling, I always had faith in God and I never thought I was going to die,” Lijana said. “I was just sort of like, ‘Oh, how do I deal with this?’”

Doctors expected Lijana to spend two months in the trauma unit, but she was only there for 11 day. Lijana credits her disposition and faith in her recovery.

“I remember in the hospital just giving it to God, and it was really hard, but I also remember always having a really positive attitude no matter what,” she said. “I remember laughing so hard as my parents were in the hospital. It wasn’t all doom and gloom.”

After being released from the hospital and staying with her parents in Florida for a while, she eventually headed back to her home in Las Vegas several months after the accident. It was back in Vegas that her brother Nik asked if she wanted to walk across Times Square with him. She said yes, and headed back down to Florida to begin training in Nik’s backyard. 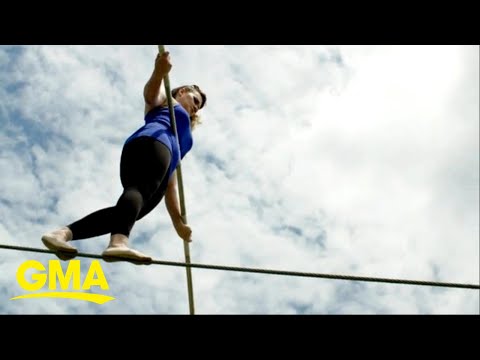 “I stepped on the wire and it was like instant PTSD,” Lijana recalled. “I just kept seeing the images I saw as I was falling to the ground getting closer and closer and closer to my face; a picture like it was yesterday.”

Despite the fear and flashbacks, Lijana persisted.

“I got on the wire again the next day. It was terrifying, and that’s strange because the wire’s my safe place, my happy place,” she explained. “This kept going on and on and on, and I would wake up at night and think, ‘How do I do this? I don’t want to do this.’”

Eventually, their training moved to a bigger wire in a public park. That’s when Lijana says something clicked.

“At one point I was walking across and I kind of felt myself balancing the way that you’re supposed to balance, and relaxing and enjoying,” she said. “Tears started streaming down my face because it was just so powerful. I got to the other end and stepped on a platform, and one of our friends, a rigor that was up there, asked ‘What’s wrong?’ And I just blurted it out: I said, ‘I forgot who I am.’”

Lijana says she realized in that moment she had forgotten how capable she was as a wire walker, a realization that was integral to her mental and emotional recovery.

Remembering who you are

Lijana has come a long way since her accident three years ago. She successfully made the 1,300-foot walk over Times Square, and has continued to perform since then. But Lijana says healing is an ongoing battle.

“I think I’m over it, and then this summer my brother asked me to come walk a wire with him, probably about 50 feet high again for this drive-in show he was doing,” Lijana said. “I was like, ‘Yeah, yeah, of course.’ But then I found myself after I talked to him in the car getting really stressed and believing these lies again.”

“I got home and I went to my practice wire out back right away, and it was instantly home,” she continued. “It was like, ‘Oh no, this is what I’m meant to do.’ As dramatic and as hard as it was,  it gets easier each time, but it isn’t one and done. It’s kind of a battle. You have to keep fighting and reminding yourself that these are lies in my head.”

Though Lijana has conquered her fears on the wire, she says she still faces daily worries and has to actively choose to not let fear control her.

“I think fear is going to be there in our life from time to time, but I think it depends on how you deal with it,” she said. “I think being brave is being afraid, but doing it anyway. And I don’t mean irresponsibly, of course. If I wasn’t a well-trained high wire walker, it’d be very foolish for me to walk on a wire across Times Square. But if you trained at it your whole life and that’s what you love to do, then even if you feel that fear, you say, ‘Nope, I can do this.’ It’s mind over matter.”

For someone in a similar position who’s faced being knocked down while pursuing their passion and has to get back on the horse, Lijana says to give yourself grace.

“Whether it’s mourning something or recovering, take that time for yourself. Don’t beat yourself up if you’re not right back up,” she said. “But also, you can do it. Keep pushing through. You can do incredible things that you don’t know you’re capable of.”

“Fear lives in the first step, and then once you get past that you start to realize, ‘Oh no, I can do this.’”

You can keep up with Lijana’s latest performances by following her on Instagram @lijanawallenda.