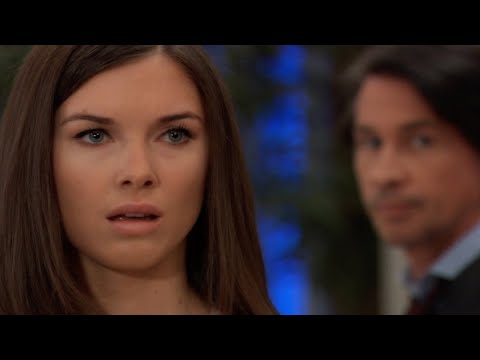 General Hospital is about the wealthy Quartermaine family that continues to be a looming presence in the town of Port Charles, with interests in much of the city’s business. Characters come and go, but viewers can always count on at least one Quartermaine or Spencer to create havoc.

After much discussion Michael and Willow get married.  They are planning on taking the ELQ jet to Vegas but Sonny says they should get married in Port Charles.

Nelle is working on getting more character witnesses and goes to Charlie’s to convince Julian to speak for her.  He declines.

Sasha is still nursing a bruised nose at Charlie’s while talking with Lucy about the very important Deception photo shoot the next day.

Brook Lynn is trying call anyone she can to post bail for her after Chase arrests her.

Trina sees Cyrus at General Hospital and lays into him.  Curtis and Jordan show up and Curtis puts himself in between the two.  Cyrus leaves but takes time to let Jordan know that he’s not done with her.  With Cyrus gone, Trina lays into Curtis for not saving her father.  Trina’s mom tries to convince Trina that she shouldn’t be blaming Curtis but she’s not hearing it.

Lucy gets a call from Sonny to officiate Michael and Willow’s wedding.  She tells Sasha what’s happening and to get rest before the shoot.  Nelle heats this as well and starts freaking out that the marriage could tip the scales of Wiley’s custody hearing in their favor she then steps into the bathroom at Charlie’s.

Julian gets a call from Brook Lynn to bail her out.  He brings her back to Charlie’s where Brook Lynn thanks him for bailing her out and she won’t have to tell Sonny about Julian cutting the brake lines and trying to kill Brad.  Nelle, having somehow stayed in the restroom even after the bar is closed comes out just in time to overhear this conversation.

When Julian and Brook Lynn leave, Nelle
leaves as well to meet her attorney and try to figure out how to deal with Michael and Sasha’s wedding.  After he says that there isn’t anyone who would marry her, Nelle gets an idea and returns to Charlie’s to find Julian and says he is going to want to hear what she has to say.

Sasha oversleeps for the Deception photo shoot.  She arrives looking a bit worse for wear.  Maxie is freaking out and gets her into makeup.  Lulu and Charlotte are there as well and Charlotte goes to watch the makeup session.

Nina arrives at the photo shoot as well and gives Maxie a pep talk before taking Charlotte to the Metro Court to meet Valentine so he can take her to school.

Nina meets Jax there and tells him that she wants to find her daughter.

Willow goes to the PCPD to let Chase know that she married Michael.  After she leaves Carly arrives and indirectly thanks him for making this sacrifice so Wiley can have a better future.

After Valentine returns to the Metro Court for taking Charlotte to school he finds Laura waiting for him.  They touch base about Charlotte and Valentine asks Laura if he can be the kind of man that puts family before money and power.  Laura says it’s more important to ask himself if he wants to be that kind of man.

Be sure to check out the After Show hosted by: NAMES GO HERE

The General Hospital After Show Podcast
General Hospital is the longest running American soap opera in production, and if you want to keep up with the Quarantines and Spencers, we’ve got you covered with the GENERAL HOSPITAL AFTER SHOW. We’ll keep you up to date with the latest drama unravelling in Port Charles, and all the celebrity guest star visits. Tune in here for reviews, recaps and in-depth discussions of the latest episodes, as well as the insider scoop from cast and crew members on the show.
'General Hospital' Recap & After Show: Trial and Many Errors
by AfterBuzz TV

Sasha finishes the photo shoot and Valentine and Peter stop by to check out the results.  While Valentine is supposed to be a hands off investor he also knew how important the launch of the new Deception brand is and wanted to see the results.  He also takes a moment to talk with Sasha and understand what it is like to do whatever is needed in the name of love.

Once Valentine leaves, the PA who supplied Sasha a vial of cocaine gives her another before she leaves.  Sasha says that was a one time thing but the PA says to keep it “just in case”.

Sonny and Jason confront Julian at the courthouse about why he married Nelle.  Julian doesn’t reveal anything but ones that he needs to tread carefully with Sonny.

Nikolas stops in at Turning Woods to visit Mike and tell about Spenser.  He runs into Sonny and Jason while leaving and Sonny asks why he hasn’t responded to Spencer’s letter yet.

Elizabeth checks in on Mike and while Sonny is with him she takes a moment to talk with Jason about what she thinks Mike may want.  Given her experience working with Alzheimer’s patients she thinks that a patient like Mike is ready to say goodbye.

Jason shares her thoughts with Sonny who is still wrestling with not being able to have the time to resolve everything he wanted to with Mike.  Jason tells him that Mike loves Sonny and that he would want him to be happy.  Sonny still isn’t ready to let his dad go though.

The invites to Ava’s unveiling of her new painting are going out and Franco and Elizabeth are both struggling with the complicated histories each has with Nikolas and Ava.

Nikolas stops in to visit Laura and deliver flowers.  Lulu is there as well and is still frosty with Nikolas.  He apologizes again about telling Charlotte that he was her personal body guard and also tells both of them a about Spencer’s letter.  Laura tells him if he thinks about Spenser’s needs he will know what to do.  He leaves and calls Spenser and says he has an answer.

Olivia calls a psychic to get help with Dante.  Brook Lynn overhears and thinks Olivia is having an affair at first.  Once the truth comes out Ned realizes that he has been too focused on the ELQ takeover that he failed to notice how much pain Olivia was in.

Nelle takes that stand and continues to lie about Brad stealing her baby which goes unchecked because there is no one to tell the real story.  Diane makes sure to bring up the assault on Willow and the fake passports for Nelle and Wiley despite the evidence being stolen from PCPD.

Julian takes takes the stand as well to explain why he and Nelle are married.  Diane makes sure to bring up that he held a knife to Alexis’s throat while they were married.

Sam comes to the courthouse to see the trial.  During a recess, Julian steps outside to talk with Sam.  She tells him that he is dead to her after this latest stunt.

Nina arrives and takes the stand to testify for Nelle.  She says she will tell the truth, the whole truth and nothing but the truth…

WWE SmackDown for May 15th, 2020 After Show: Full Steam Ahead with Mr MITB!