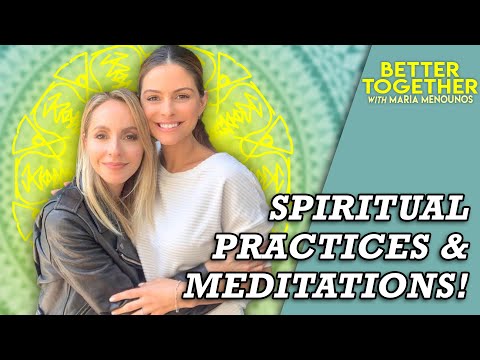 Every week, host Maria Menounos will bring you the world’s leading healers, experts, influential celebrities & game-changers to share groundbreaking secrets and tips to getting better in all areas of life, including physical health, emotional wellness, spirituality, finances, relationships & more. Getting better isn’t easy, but it’s a whole lot easier when we do it together.

Support the show by becoming a patron and getting access to exclusive content, and an extra episode every week! Patreon.com/MariaMenounos

Even though we’re facing one of the largest global health crises in a century, we can still find inner peace. Spiritual thought leader Gabby Bernstein is here to coach us through practical ways to stay spiritually healthy during this time!

Featured on Oprah’s Super Soul Sunday as a next generation thought leader, Gabrielle Bernstein is making her mark. Gabrielle is the New York Times Bestselling Author of the book May Cause Miracles, A 40-day Guidebook of Subtle Shifts for Radical Change and Unlimited Happiness. Her earlier titles include Add More ~ing to Your Life – A hip guide to happiness and Spirit Junkie – A Radical Road to Self-Love and Miracles (published by Random House.) Gabrielle is also the founder of the social networking site HerFuture.com for women to inspire, empower and connect.

Since 2004 Gabrielle has been on an International speaking circuit. She has presented lectures at Google, TEDxWomen, The WIE Symposium, Kripalu, the Massachusetts and Philadelphia Conferences for Women, L’Oreal, Avon/mark. Cosmetics, Agape Spiritual Center, Nobel Women, Integral Yoga, Universities nationwide, The Step Up Women’s Network, The Junior Leagues and many other venues.

Gabrielle sits on the advisory board for NYU’s Of Many Institute for Mulifaith Leadership, and of Feminist.com’s “Our Inner Lives” religion and spirituality project.

Youtube chose Gabrielle as one of their 16 Youtube Next Video Bloggers, she was named one of Mashable’s 11 Must-Follow Twitter Accounts for Inspiration and she’s featured on the Forbes List of 20 Best Branded Women. Gabrielle has a weekly radio show every Wednesday on Hay House Radio and is a featured curator for Opensky. She has been featured in media outlets such as The New York Times Sunday Styles, ELLE, Oprah Radio, Anderson Live, Access Hollywood, Marie Claire, Health, SELF, Women’s Health, Glamor, The New York Times Thursday Styles, Sunday Times UK, Covers of Experience Life and Self-Made Magazines (top 50 Women in Business), US Weekly, People, CNN, Fox & Friends, PBS, Wall Street Journal, Sirius Satellite Radio and many more

Thanks for listening to Better Together with Maria Menounos!

Please help us by rating, commenting and subscribing on Apple Podcasts & Spotify.

If you love the show, be sure to tell a friend and social your favorite moments from the episode!

If you want to email us you can reach us at bettertogetherwithmaria@gmail.com or visit mariamenounos.com!

We’ve launched a patreon that will include exclusive episodes and access! To find out more go to: https://www.patreon.com/join/MariaMenounos

Better Together with Maria Menounos
Every week, host Maria Menounos will bring you the world's leading healers, experts, influential celebrities & game-changers to share groundbreaking secrets and tips to getting better in all areas of life, including physical health, emotional wellness, spirituality, finances, relationships & more. Getting better isn't easy, but it's a whole lot easier when we do it together. Support the show by becoming a patron and getting access to exclusive content, and an extra episode every week! Patreon.com/MariaMenounos
176. WWE Champion Alexa Bliss On Finding Perseverance Despite Humble Beginnings
by Maria Menounos

Ep. 176 #BetterTogetherWithMariaMenounos #AlexaBliss  What do Disney, The Big Comfy Couch, and Kicking Ass all have in common?

They’re three of @wwe_alexa_bliss_ ‘s favorite things in the world, among many others that we discussed here on today’s show, but we also went deep. How does Alexa push through a grueling schedule (and injuries) and remain on top?

A lot of it has to do with her humble upbringing, including the surprising place she grew up!  But it’s not ALL serious talk. Alexa is head-over-feels for her new fiance @Ryan Nilsen_Cabrara and she has PLENTY of behind the details for those of you shipping them as hard as I do.