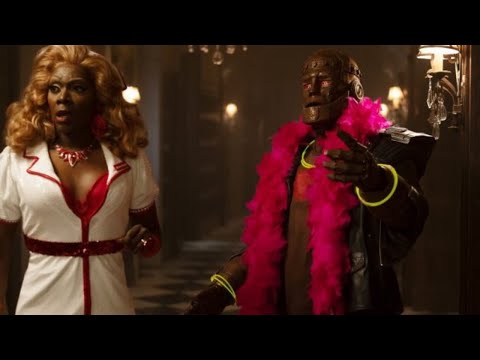 By:  Tehran Von Ghasri – @iamtehran
On this weeks RECAP:  DC’s DOOM PATROL – SEASON 2 – EPISODE 4 – SEX PATROL – Cyborg is back, Jane is gone, and Rita’s G spot almost ends the world.
Picking up with a broken Danny, thanks to Dorothy’s clumsy or possibly subconsciously purposeful hands, Danny is still not put together.  Dorothy sad and Niles not knowing what to do, the crew is stumped on how to fix Danny.  Thankfully, the Dannizens including some favorites such as Flex Mentallo and Morally Corrupt, come to the rescue as they show up at the door.  The fix, according to Morally Corrupt is to throw a party as Danny is an idea and needs to be shown love to exist and grow.  Niles tells Dorothy Danny will be fixed by Bedtime.  As it gets closer to bed time and nothing happens Dorothy remembers her favorite Danny song.  The father/daughter duo sing a duet and grows into a musical number.  Danny opens up the club, but the fix is far from done.
We get a flashback of London circa 1978, where Dorothy is being kept in Danny, but not up top with everyone else but below away from everyone.  Her father comes to visit but does not stay.  We see Dorothy’s time in Danny is extremely lonely.  When Dorothy is about to wish in a colloquial manner of speaking Niles gets very upset and worried, telling her to never use those words.
Back in the present, Dorothy has a moment with Rita as she watches Rita put on make up and asks if she is beautiful.  Rita, says of course because everyone is beautiful but sometimes we need enhancement.  After asking Dorothy’s age, which is 11, she asks how long shes been alive and its 100 and 3 quarters.  Rita puts make up on Dorothy.  Downstairs, Niles gets mad with the make up.  As bedtime approaches and Danny is far from fix, Dorothy wants to stay up but is told to go to bed.  In bed, Dorothy says good night to Herschel, her imaginary spider.  Candlemaker however has other plans as he instigates Dorothy to stay up because she is a grown up.  Dorothy goes back to the party.  At the party, Candlemaker convinces Dorothy to possibly destroy Danny as he was her prison.  Dorothy asks Danny outright, to which Danny slightly confesses.  Dorothy approaches to destroy Danny but does otherwise at the last moment.
In the basement, Niles and Cliff run into each other.  Cliff is coming off his disappointing trip to see his daughter.  As he takes it out on Niles, Niles explains everyone messes up.  Cliff decides to join the party and has a good time, doing the robot and dancing with a shadow.
Cyborg is also back after his disappointing rendevous with rejection.
Rita, in an effort to use her powers has a conversation with Flex on how he uses his.  He says he clears his mind.  Rita remembers Season 1 Penultimate Patrol episode when Flex gives everyone a mind blowing orgasm, and how that cleared her mind.  She asks him to do it again, in the privacy of her room, with his face to the wall and his nose on a red dot she places on the wall.  Flex obliges and Rita has a mind blowing orgasm that gives her a flashback to Burbank, California 1931 where her mom has sex with a producer in order to secure Rita a part, and tells her to use her “other” talents.
Unfortunately the orgasm is so strong it unlocks a sex demon.  This brings the Sex Men to the house to save the day.  They warn the team if the powerful Sex Demon has a child and the child cries, all the children of the world will perish and the world will forever be stuck in a torrid sex party.  Ghosts of sexual acts abound and Rita’s room is a portal.  The Sex Men, who Niles is familiar with cannot go in effectively.
Jane is having a different time as she is no longer allowed to be in control.  First the painter, then Harlot Scarlet, then Crazy Jane take over hosting with the idea being they will get out of the manor and go on their own.  They dont seem to do that as Painter is stuck when confronted with the notion of how to pay bills or do anything to live in the real world.  Harlot Scarlet is having too much fun at the party and Crazy Jane cannot take the hug at the end Cliff gives her.  Jane however does manage to save the day.  Jane goes in the room, takes the baby, and punches the sex demon in its nether regions sending it back and effectiveley saving the day.
Dorothy, way past her bedtime, ends on the stairs and asks a ultra relaxed Rita if what she meant by saying Dorothy was beautiful was true.  Rita tells Dorothy to use her “other” talents.
All this and more on the Afterbuzz Aftershow.  Stay tuned.

On this weeks RECAP via Den of Geek:

This episode is a bit of a clean up after the Danny party. Rita goes to audition for community theater, Larry sets out to help his son Paul clean out his dead son’s home, and Vic basically stalks Roni (with Cliff in tow), and Dorothy seems content to be a little girl and play with Baby Doll. And Chief continues on his apology tour, currently with Jane.

All this and more on the Afterbuzz Aftershow.  Stay tuned.