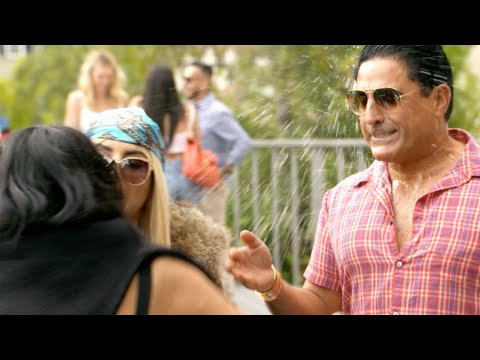 The Shahs of Sunset AfterBuzz TV After Show Podcast breaks down and discusses every week’s episode of Shahs Of Sunset!

GG has unbearable pain and has to undergo emergency surgery, in which both of her Fallopian tubes are removed. The gang goes to visit her, and she tries to make them see that there are bigger problems in the world than the petty drama they are going through. Reza is mad at Mike and Nema and has them blocked in his phone because he thinks they’re taking MJ’s side, and they all talk about it when visiting GG at her house. Reza decides that he needs to apologize to MJ, meanwhile, MJ and Tommy are meeting with a lawyer to decide how to move forward with the criminal and civil cases against Tommy. They also go to therapy, where Tommy reveals he’s been struggling with the aftermath of MJ’s health complications while giving birth. Mike is moving forward with his development project, but feels overwhelmed at how much work it’s going to be to maintain the project himself.

The Shahs Of Sunset After Show Podcast
It's hard to be a socialite in LA especially when family comes into play. It's even harder when your family is a little bit… different. Check out the SHAHS OF SUNSET AFTER SHOW as we discuss all the craziness that happens in the lives of these six persian-american friends while they live the LA Lifestyle! Tune in weekly for reviews, discussion, and interviews with the cast! Subscribe and rate and comment to let us know your thoughts on the series as well!
Shahs of Sunset S8 E13 Recap & After Show: Back to the Crime Scene
by AfterBuzz TV

It’s the season finale of ‘Shahs of Sunset’ and Gigi is getting ready to go through another round of IVF, as Nema finally confronts his dad during a lunch outing with his sisters. MJ throws a Sip ’N See party for everyone to meet baby Shams, but Mike and Paulina don’t attend; they are still mad over MJ’s comments to Paulina in Hawaii. Sara throws a 4th of July party and the whole gang attends, but tensions arise when MJ finds out that Reza won’t be dropping the restraining order against Tommy out of respect for Adam’s wishes.

Allegra And Jake Dig Themselves Out of A Tight Spot – S1 E9 ‘Briarpatch’...
Scroll to top