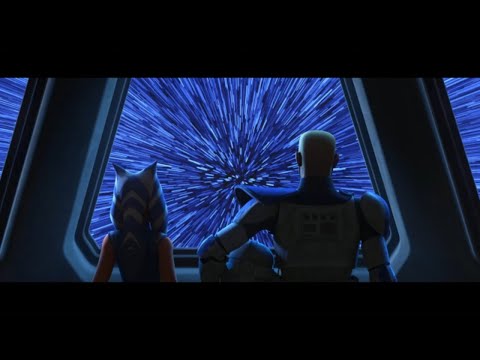 “SHATTERED” was the best word to describe this episode and that makes it a fitting title. Darth Maul has been captured. The Mandalorians have caged Maul in a device from decades old when Mandalorians had to contain force-wielders. It was believed Dutchess Satine outlawed them, but Bo Katan claims “this is the last one”. This was very reminiscent of Silence of The Lambs- even going as far to put Maul in a muzzle. We get an extended scene from “Revenge of The Sith” with a hologram call from the Jedi Council. Mace Windu updates the council on Obi-Wan engaging General Grevious and expresses concern with senator Palpatine. When Ahsoka asks for more information she is SHADED by Windu saying this information is only privy to Jedi and not “citizens”. Everyone hangs up except for Master Yoda who senses Ahsoka has more to share, but Ahsoka does not share and ends the call. ORDER 66. Ahsoka and her fleet of the 501st leave Mandalore on course to Coruscant. While on the main deck, Ahsoka senses something…. It’s Anakin. He’s in pain. Suffering. Something terrible has happened. She goes to Rex who has just received a call from none other that Darth Sideous. His body is telling him no, but his mind is telling him yes. Through tears Rex express what little connection he has left with Ahsoka to go find “Fives”, only to become overwhelmed by the order and proceeds to attack Ahsoka along with the rest of the clones. Ahsoka, confused and afraid, disarms Rex and flees through the ceiling. Rex orders the clones to go execute Maul and search for Ahsoka. Ahsoka finds a group of astromech droids including R7 and they hack into the Jedi archive mainframe only to discover what Rex alluded to- a video recording of Rex talking about Fives having the clone inhibitor chips having a secret purpose to kill all the jedi…. Ahsoka frees Maul, but not to form an alliance, only to have him be a distraction. Ahsoka devises a plan to trap Rex and remove the inhibitor chip. The droids fix the doors around Rex and they knock him out. R7 scans Rex, but cannot find any signs of an inhibitor chip. Ahsoka grabs Rex’s face and repeats “I’m one with the force, the force is with me.” Rex starts to repeat the phrase and the microchip is discovered. Meanwhile… Darth Maul wrecks shop in a hallway Vader-Rogue-One-style. He decapitates two clones and chops one’s arm off! The clones are breach the door Ahsoka, Rex, and the droids are in. They open fire on Ahsoka and just in the knick of time- Rex awakens with a clear head and opens fire on the clones. Rex is back! The episode ends with him revealing that every clone across the galaxy has been ordered to take down the Jedi. TO BE CONTINUED…. This aftershow was hosted by: Ryan Nilsen @RyNilsen, Rachel Goodman @RachelRadnerAuthor and Frankie Alteri – @frankiealteri84

On the Clone Wars FINALE ALL IS ANSWERED… and the epic conclusion to the hit animated series doesn’t disappoint! Ahsoka and Rex have to escape the star destroyer while evading Order-66-turned clone troopers! Ahosoka refuses to kill the clones and Rex switches his gun to stun. Meanwhile, MAUL is wreaking havoc on the ship and destroys the hyperdrive MID FLIGHT. The ship begins to crash land. Maul gets away and flies to Dathomir. Rex and Ahsoka miraculously survive. They go to the planet the ship crashed on and bury all the clones. There’s a cemetery with their helmets. Before leaving Ahsoka leaves her saber behind. TIME JUMP. Lord Vader himself approaches the crashed ship only to find the lightsaber Ahoska dropped, thel ightsaber he gave her, the lightsaber he ignites with a snowy imperial troop behind him. @RyNilsen @FrankieAlteri @RachelRadnorauthor

How Comedian Nikki Glaser is Surviving the Quarantine | AfterBuzz TV