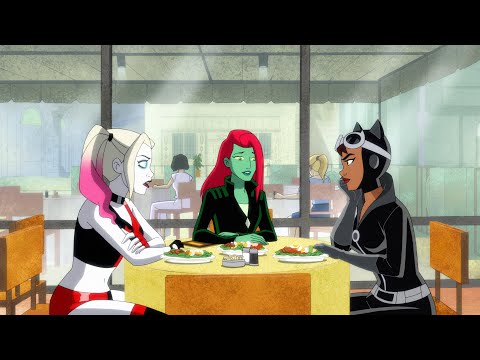 Harley and her crew find themselves at Mr. Freeze’s territory of New Gotham to get her revenge on Mr.
Freeze. His two henchmen, Fred and Kevin, accidentally relay the exact information needed to
invade his fortress – the firegun from the Gotham Natural History Museum.
Kite man, who gives Harley and Ivy a lift to the museum, expresses his love for Ivy with
premade snacks and a kiss goodbye, giving Harley the impression that Kite man is not good
enough for her bestie. Upon entering the museum, they encounter traps that are set by Dr.
Trap himself. After testing some with a thrown coin, they realize they need the help of a third
party – Catwoman.
Back at Harley’s lair, Riddler is put to work on the running wheel giving power to her crew.
Riddler taunts Dr. Phsyco, playing on his insecurities. In a fit of rage, Dr. Psyco begins to throw
miscellaneous lotions and body butters at him, allowing Riddler to set the stage for his grand
escape. When everyone is occupied, Riddler uses the lotions to rub all over his body and slip
out of his shackle, taunting Psy, Clayface, Shark and Dr. Psyco to give chase in hopes of finding
him before Harley returns. Riddler actually comes back, in a show of good faith, confessing his
want to stay.
Harley and Ivy meet with Catwoman to discuss helping them through the plethora of traps.
Although aloof, she accepts as long as she can steal the Egyptian ruby for herself. Over lunch,
Ivy displays the apparent girl crush she has had on Catwoman and how much she covets the life
Catwoman has made for herself.
When the time comes to break into the History Museum, Ivy girlfans over Catwoman’s stealth,
while Kitman confesses to Harley that he is going to participate in the heist so he can steal a
leaf-shaped diamond ring to propose to Ivy. As the quest begins, Kite Man displays his inability
to defeat any trap. He and Harley meet up with Ivy and Catwoman at the firegun destination.
Broken and bruised, he is convinced this is the time to propose to Ivy. But upon opening the
ring box, there is no ring to be found. All eyes turn to Catwoman as she is quietly escaping with
the ring on her finger.
Dr. Trap takes this moment to capture Harley, Ivy and Kite Man in one of his traps and squish
them to death. Kite man desperately tries to explain the purpose of his proposal, while Ivy
confesses, she is not ready to marry and doesn’t know if she ever will be. A tear quietly slides
down Kite Mans face. Ivy turns to point out that Harley is in fact in possession of a firegun. She
uses the firegun to blow a hole in the trap in the nick of time, allowing Dr. Trap to be vulnerable
for the takedown.
The end scene, over acid dripping board members, Harley and Ivy share a sweet moment,
where Harley gives her blessing for Ivy to marry Kite Man. In turn Ivy confesses she wants to get
back to her roots, and perhaps having people to support her in the process isn’t as bad as being
alone. Ivy returns to Kite Man’s shabby apartment in hopes of asking him to ask her again. The
answer must wait until next time.Follow us on http://www.Twitter.com/AfterBuzzTV