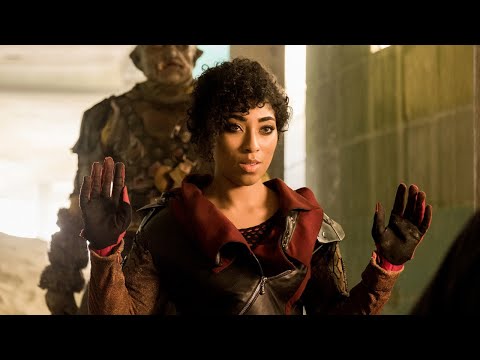 Space, royalty, outlaws, and a rescue mission! It’s the VAGRANT QUEEN AFTERBUZZ  TV AFTER SHOW where every week our hosts will be breaking down the episode of this SYFY series. Join us as we get ready to blast off to space every week, plus bringing you a special segment and news and gossip!
In the premier episode we are introduced to our lead character Elida (aka Eldaya) Al-Feyer as she navigates the Xija Space Station in an effort to gain information about her past. We also meet Elida’s sidekicks Isaac and Amae. Elida has been running from her past life as Queen of Arriopa for the past 15 years. Things, however, come to a head though when Isaac offers Elida information about her mother in exchange for control of his former ship, affectionally named Peggy.  Our hosts Kari and James premier their special segment “Winni-WHO, Winni-WHAT” and offer viewers weekly news and gossip about the show.