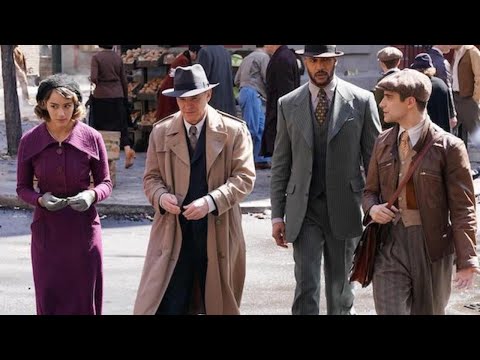 On the premier episode fo the final season of MARVEL’s AGENTS OF S.H.I.E.L.D. – SEASON 7 – EPISODE 1 – THE NEW DEAL – the team has traveled back in time to 1931 in the height of the prohibition era in order to prevent the Chromicoms from destroying humanity as we know it. We begin the episode with 3 Chromicoms who take the faces and identities of 3 police officers, by literally burning the faces off the bodies. They are Hunters and have been assigned to complete a new mission. The team is on board, plus Gemma and Enoch, the spaceship faced with the dilemma to awaken an LMD version of Culson. They are torn because they know this is not what Culson would have wanted however it is what the team and the world may need right now. Quake sees Culson and before the discussion can be concluded hits the button. Culson is woken and goes through a confusing state as he is attempting to process 2 years of information in 10 seconds. Mack shuts him off. They awaken him later and is brought up to date. After hearing the call in regards to the police officers who had their faces burned off, the team plans on finding the Chromicoms and stopping their plan to take over the world. Deke updates the team on the possible guidelines of time travel as they use Deke’s humorous guise of being Canadian Mounties who are helping the police investigate the gruesome deaths. Once on the scene, Deke begins to scan the bodies for DNA and clues while Culson and Mack follow up on a clue on a bottle of whiskey with a swordfish which Culson presumes is in relation to a close speakeasy which is a hub used by the Strategic Scientific Reserve (SSR) precursor to SHIELD. After an encounter Mack and Culson are reunited with a Koenig, this time Ernest Hazard Koenig who is owner of the speak easy. While Quake and Deke are attacked by the returning Chromicoms in their new identity. On this ship, Gemma offers Yo Yo a new pair of arms to easier fit in. Yo Yo is reluctant to accept them because she does not want to forget. Quake and Deke manage to bring back a Chromicom hostage. Gemma hooks up the Chromicom to a machine to generate continual junk data in a torture method in order to extract the nature of the Chromicom plan. Mack, Culson, Quake, and Deke attend the Governor FDR party as he is to begin his presidential run, thinking FDR is the Chromicom target. They are joined by Freddy on behalf of Koenig. As the team attempts to protect FDR from a possible Chromicom attack, on the ship Gemma is able to extract the name Freddy. Freddy is the the actual Chromicom target not FDR. The team arrives just in time to save Freddy. Turns out Freddy is the key to Hydra and the team must save Hydra in order to save the world. No Hydra. No SHIELD. So at this time its all hail Hydra. All this and more on the AfterBuzz aftershow.
Hosted by: Christian Bladt, Tehran Von Ghasri, Rachel Goodman, Katie Kawamoto

The Agents of S.H.I.E.L.D. Podcast

Agents of S.H.I.E.L.D S7 E7 Recap & After Show: The Totally Excellent Adventures of Mack and the D
byAfterBuzz TV

From IMDb: After getting stranded in 1982, Mack retreats to his childhood home to deal with the death of his parents; Deke scouts a group of new agents.