Up Is Down – S1 E6 ‘Motherland: Fort Salem’ Recap & After Show with Amalia Holm 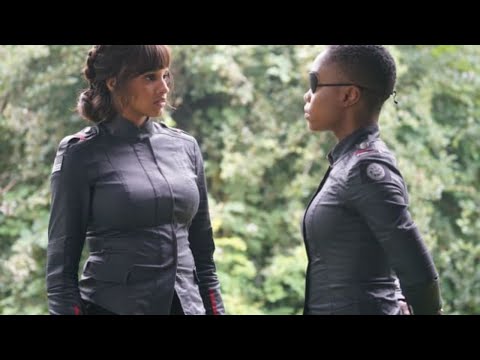 Witches have never been hotter, and now, we’re covering TV’s best new witch Show, Motherland: Fort Salem. Each week, our incredible team of AfterBuzz TV hosts is here to recap all of the magic, with expert commentary, cultural insights, and even wild fan theories and predictions. From Harry Potter to Eastwick to AHS: Coven, TV Witchdom is a hellishly wonderful space, and we’re here to make sure YOU don’t miss a thing.

Everyone debriefs last episode’s Spree attack, with General Bellweather investigating the spell used to dampen their abilities. Autopsies of Spree victims reveal they are now attacking witches, particularly young Bellweathers. With this revelation, General Bellweather assigns a bodyguard, Bridey (Naiah Cummins), to Abigail (Ashley Nicole Williams) despite her daughter’s insistence to prove her compentency. While sparring Bridey, Abagail finally breaks over letting her guard down at the wedding, and Bridey later shares her own story of grief from losing one her sisters on a mission.
All the while, Raelle (Taylor Hickson) is frustrated with a lack of response in finding Scylla, so she follows necromancers into their morgue where Scylla’s teacher, Izadora (Emilie Leclerc), discovers Raelle and informs her that Scylla died during the attack. Raelle is riddled with grief herself, but when Scylla’s sigil appears in her hand, she steals her unit’s salva rations in an effort to fly to the lighthouse on the beach where she is certain Scylla is waiting.
Tally discovers Raelle’s plot and with Abgail and they convince Bridey to escort them off base to rescue her.
We find that Scylla is, in fact, alive, being detained and questioned by Izadora, Anacostia, and soon, Alder.

Motherland: Fort Salem After Show Podcast
Witches have never been hotter, and now, we're covering TV's best new witch Show, Motherland: Fort Salem. Each week, our incredible team of AfterBuzz TV hosts is here to recap all of the magic, with expert commentary, cultural insights, and even wild fan theories and predictions. From Harry Potter to Eastwick to AHS: Coven, TV Witchdom is a hellishly wonderful space, and we're here to make sure YOU don't miss a thing.
Motherland: Fort Salem S1 E10 Recap & After Show w/ Eliot Laurence : Our ancient enemy has returned!
by AfterBuzz TV

The cadets have graduated from Basic Training, but the Bellweather Unit appears to be the only one not advancing to War College. Instead, upon Khalida’s insistence, they accompany Adil (Tony Giroux) and General Alder (Lyne Renee) on a mission to rescue the remaining Tarim. Meanwhile, Anacostia (Demetria McKinney) makes another attempt to understand what motivates Scylla (Amalia Holm), which culminates in the two sharing similar stories of how they found their respective sides after the loss of their parents. After deploying in the Tarim basin, the Bellweather Unite have a heated conversation with Alder, who defends her seemingly questionable decisions as the ever-present challenge of leadership while sharing her own tragic history. Reaching their destination the following day, Alder convinces Tally her efforts are to save wtichkind and better the world, not seize power. Raelle heals a sick child, which convinces the Tarim to follow the soldiers outside, but they are ambushed by the Camarilla. They burn the helicopter pilots at the stake and initiate a gruesome fight, which wounds one of Alder’s Biddies, leaving Tally to offer her youth to Alder in order to keep her alive. As everyone boards the last helicopter, Raelle attempts to once again save the stragling child but is stabbed through the back with a sword and left for dead. Abigail bails in an effort to save Raelle as the chopper takes off but the two are somehow saved by the sickness which Raelle had removed. Finally, Anacostia helped Scylla escape imprisonment, but follows her into the private sector and to the Spree hideout where Raelle’s presumed-dead mother has been giving the orders. Hosted by Bryant Santos, Kevin Allen, Toree Weaver, and Gunner Texiera