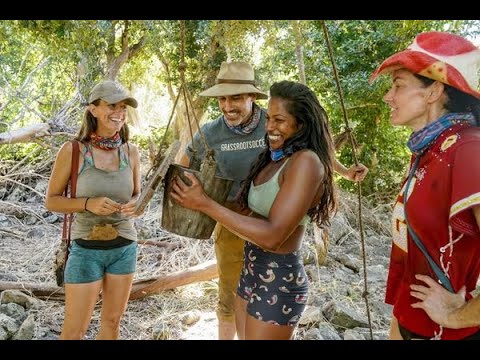 The veteran reality series hosted by Jeff Probst brings its 18 castaways to San Juan Del Sur, Nicaragua, for its 30th installment. This season sees the group divided into three tribes — the white collars, which includes a corporate executive and a retail buyer, the blue collars, which includes a postal worker and a contractor, and the no collars, consisting of free-spirited individuals who are known to break the rules. The three tribes approach the game and how the interact with each other differently, while all sharing the same goal, to earn the title of Sole Survivor.

After tribal, Sarah is irate with Tony for taking out her other close ally, Sophie. Tony is apologetic, and it appears Sarah is still willing to work with him.
At the Edge of Extinction, the group has an extreme endurance challenge: the first six players to collect 20 coconuts from the other side of the island will earn two fire tokens (leaving five players with nothing). The challenge is brutal, and Boston Rob sustains a bloody injury to his elbow in a fall, but completes the task even after he has already lost the challenge in a show of pride and respect for the game.
Back at camp, players are looking for a hidden immunity idol, knowing that Sophie was voted out with an idol in her pocket at last tribal. Ben finds the idol with Tony present.
At the immunity challenge, players must hold up their hand tethered to a bucket of water above them, while standing on a small beam. Several players, including Kim, willingly step out of the challenge for peanut butter and cookies. Tony and Denise win, and each earn two fire tokens.

Back at camp, Kim attempts to rally the other players to take aim at Tony. Because he won immunity, the group agrees to target Jeremy. Ben reveals the plan to Tony, who convinces Ben, Jeremy, Nick, and Sarah to target Kim. A tense tribal ensues, with last minute whispering. No idols or advantages are played. Kim is sent to the edge.

Today’s After Show Was Hosted By: Timothy Michael and Mike Thieling

The Young And The Restless Podcast
Follow Genoa City’s elite upper class in the YOUNG AND THE RESTLESS AFTER SHOW. We’ll break down the family ties, power structures, and ever-changing relationships episode by episode. Tune in here for reviews, recaps and in-depth discussions of the hit soap with super fan hosts who know what they are talking about.
Serious Talks, Serious Walks, and Serious Revelations – January 27th -January 31st, 2020
by AfterBuzz TV

This week, Victoria and Billy had a very serious conversation where he told her he could no longer be with her. He moved out and ended up getting into a fistfight at a gambling table in the bar, and Amanda steps in and legally takes care of the charges. Meanwhile, Sharon continues to handle her cancer prognosis. Phyllis becomes suspicious and tries to figure out what’s going on. Phyllis finally takes a guess that Sharon is sick, and when she confronts Nick he basically admits it. Hurt by this news, Phyllis decides to stop pursuing Chance, leaving him to Abby. Lastly, Adam continues working with Chance on a mysterious project. They keep mentioning they have found “her”–presumably Amanda–but they have remained very vague about what their plans are, and Chance will not discuss this even with Phyllis. Chelsea overhears Adam mention something about this over the phone after they’ve discussed moving to Paris, making us wonder if Chelsea and Adam are going to have an even more serious talk.

What We Do In The Shadows S2 E4 Recap & After Show: The Vampires are Cursed...

Motherland Fort Salem S1 E7 Recap & After Show: Out With the Old, In With...