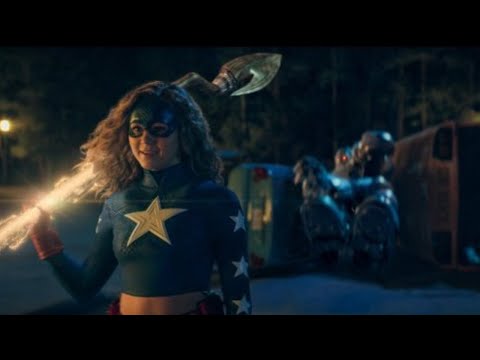 On this weeks RECAP:  DC’s STARGIRL – SEASON 1 – EPISODE 2 – S.T.R.I.P.E. – Courtney bonds with the staff, Pat and Courtney keep secrets, and Brainwave gives an ultimatum.
We begin this episode directly where we left off of the pilot with Pat in the now STRIPE machine and Courtney with the staff after a confrontation with Brainwave.  Pat wants Courtney to give up the staff and the notion that Starman is her father.  Courtney strongly disagrees.  She wants to find Brainwave and the others who she feels murdered her “father” who she believes is Starman.  She takes Pat’s advice to quit the wrong way and decides to don a costume.
Brainwave vistas The Wizard in the middle of the night.  The two have a confrontation on how to handle the situation.  Brainwave accuses Wizard of being soft because of his family, and states he reached out directly to Icicle.  Wizard says he was left in charge of Project New America, the first sign of the nefarious purpose of the villains.
At home, both Courtney and Pat, are a little beat up which does not go unnoticed by Barbara.  She asks what happened and each awkward explains they fell down the basement stairs.  The stories seem fishy but Barbara is on her way to her new job.
Once there her boss turns out to be Steven Sharpe, a member of the Injustice Society.  Barbara tries her best to impress him with ideas which he turns down one after another.  The other employees are aware of his temperament and remain quiet, Barbara being the only trying to be extra helpful.
Pat visits Crusher at the gym out of curiosity and motivation to get in shape to be a hero.  The comic relief, Crusher takes the burger from Pat’s hands and in true bro fashion shouts we are getting “ripped.”
Courtney is still having a time at school and still eating lunch at the loser table.  She is inundated with the notion of finding Brainwave.  She makes a costume for herself in the home ec room.  That night is a school open house which will bring out the community.  She hopes to find out who Brainwave is.
Brainwave has a similar notion as he has part of a school ID.  He plans on finding out who his new nemesis is at the Open House.  His son he we see him speaking to earlier, trying to ascertain and bully him into having mind powers like himself, and reminding him not to steal from family.  His son is surprised his father Henry King Sr, is at the Open House since its an event he never attends.
Courtney mandates Pat help look for Brainwave at the Open House as well.  Pat runs into Denise Zarick, the Wizards wife who seems smitten by the unbeknownst Pat.  Brainwave and Courtney look for each other and when they find each other Brainwave follows Courtney who is trying to run out.  Brainwave catches up with Courtney and gives her an ultimatum, threatening her mother with a painful death if Courtney does not bring him the staff to the school by midnight.
Pat refuses to let Courtney go, and goes in her stead.  He is being beaten by a powerful Brainwave when Courtney shows up in her new customers with the staff and announces she is Stargirl and STRIPE (Pat) is her sidekick.  She beats Brainwave but he may be dead which she is feeling guilty of.  There is a flash of Solomon Grundy at the end.  All this and more on the Afterbuzz aftershow.
Be sure to check out the After Show hosted by: Chae’ Jones, Tehran Non Ghasri, Jeff Williams, and special guest Christopher James Baker