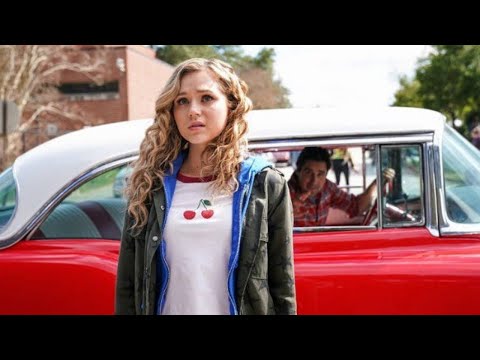 In this premier pilot episode of CW’s STARGIRL – SEASON 1 – EPISODE 1 – PILOT – A golden age of heroes protected the world for decades.  Ten years ago that golden age ended.  But this one has just begun.
We being the episode following Pat Dugan in a classic, seemingly 1955 Oldsmobile, driving frantically towards a mansion estate.  Inside the mansion a roaring battle is going on between the Justice Society of America led by Starman’s heroics and the Injustice Society comprising of villains Brainwave, The Wizard, Icicle, and Grundy.  Starman putting up the last bit of fight heroically stops Brainwave but is caught off guard by a sharp icicle by Icicle which leaves him fatally wounded.  Pat Dugan, Starman’s sidekick gathers him and takes him into the car.  Grundy gives chase, as Dugan puts the car into special gear and takes to the sky but not before the car is damaged by Grundy.  The flight gets the sidekick and hero out of harms way but crash lands later.  Unharmed by the crash but fatally wounded, Starman gives Pat the staff and tells him to hide it.  To give it to one who is worthy, and humorously that is not him at all.
Mike has become very adjusted and made new friends.  He leaves as Courtney is left with Pat and Barbara. Courtney also finds the Cosmic Staff which brightens and comes to life at her touch.  The staff only meant to be held by Starman works for Courtney and takes her on an adventure.  Courtney finds herself at the drive in and once again stands up to the jock bullies as they bother other movie goers, blowing up the jocks car.
As she sleeps that night, the staff comes to Courtney.  The staff takes her to practice.  As she practices, the jock, Henry King Jr is being chastised by his father for blowing up the car.  Realizing the significance of the staff, we see that his father, Henry King Sr, is none other than Brainwave.  Suspicious of the return of Starman, Brainwave calls Icicle who tells him to do nothing.  Brainwave goes to investigate and runs into Courtney.  As a fight is about to ensue, Pat emerges in STRIPE, the robot armor suit.
An all star cast with all star action, we discuss this on the Afterbuzz Aftershow and more.  Stay tuned.
The After show is hosted by Tehran Von Ghasri, Chae’ Jones, and Alice Ford.

StarGirl After Show Podcast
Courney Whitmore's life changes after discovering not only her stepfather's old life as a superhero, but also a source of immense power in the form of a staff. Join us on the STARGIRL AFTERBUZZ TV AFTER SHOW PODCAST as we follow Courtney's acts of inspiration for future heroes. Subscribe and comment to stay up to date.
StarGirl S1 E2 Recap & After Show with Christopher James Baker: Truths and Run-Ins
by AfterBuzz TV

After Courtney has an unexpected run-in with a member of the Injustice Society of America, Pat reveals the truth to her about their history; Barbara is elated when she sees Courtney making an attempt to get along with Pat.

Be sure to check out the After Show hosted by: Chae’ Jones, Tehran Non Ghasri, Jeff Williams, and special guest Christopher James Baker