Legends Of Tomorrow S5 E13 Recap & After Show: “Zombies. Why did it have to be Zombies?” 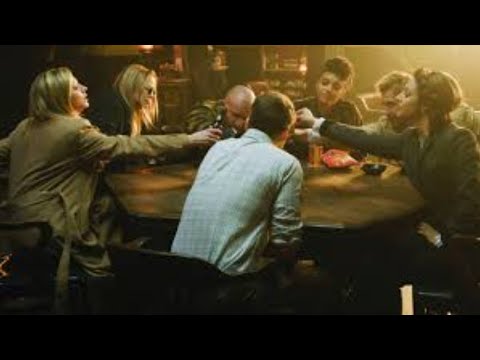 The Legends having just drunk from the chalice of Dionysius have 24 hours of immortality and to use the Loom.  Before they can board the Waverider though it is stolen by Charlie’s two Fate sisters and Astra, who is repaying the debt she owes to them.  After a touch from Ava, Sarah has a vision she doesn’t share with the team and instead says immortality has caused her to lose her powers.

The Legends decide to head to the old Time Bureau safe house in London and get a courier to get them about the Waverider.  Unfortunately without the Waverider they have no transportation and end up commandeering a bus.

Unknown to the Fates and Astra, Gary is also on the Waverider.  Gideon has been disconnected by the Fates and when Gary tries to restore Gideon he is shocked and when he regains consciousness to see Gideon in human form.  She tells them they need to get the rings away from the Fates.

Before they can grab them, one of the Fate sisters uses a ring to bring a zombie plague upon the U.K. to kill the Legends.

Rory ends up hitting a zombie with the bus which puts the bus out of commission.  After fighting a zombie horde, Constantine and Zari leave to look for transportation while the rest of the Legends are arrested by the British army because they think they are super zombies because of the immortality charm.  They put them on a truck and head off.

Constantine and Zari make it to a auto body shop and see a truck they can use but zombie attack before they can get to the vehicle.  The two hide inside the garage behind a locked door. Constantine has a plan to get them to the truck but it requires a spell that will make Zari’s heart stop and seem as if she is dead.  Since for some reason the zombies aren’t interested In Constantine he can carry her to the truck.  The plan works and Constantine restarts Zari’s heart and the to speed off.

The rest of the Legends are able to escape for the truck just in time for Constantine and Zari to pick them up and they head to the London safe house.

Gary is able to sneakily grab the rings and heads to the lab to grab a courier to retrieve the Legends.  Unfortunately the Fate sisters and Astra arrive.  Gary the realizes that Gideon is just a figment of his imagination brought on by the shock he received.  The Fates wants the rings but Gary uses a spell to conceal them.

To convince Astra that she should be on their side, a Fate sister shows Astra what will happen when her mom comes back to life.  Astra sees her mother die again of old age.  Why bring her mother back just to lose her again.

Astra goes to torture Gary to get the rings and Gary learns that what the Fates showed Astra about her mother.  He reminds her that that was only her death and there are plenty of other great memories of her mother.

Meanwhile, the Legends make it to the safe house only to find the courier has run out of charge.  While it charges, the Legends drink and think about what they will do after this is over.  Sara goes to the bar and Ava joins her and asks her to tell her what is really going on.  Sara admits that she had a vision of her dying at the safe house.  The courier doesn’t charge in time and zombies break in and kill her.  Unfortunately, Sara’s vision stops at her death so she doesn’t know what happens after but she has full confidence that Ava and team can save the day.

Constantine and Zari step away as well and, after some heated arguing, end up giving into the sexual tension between them.  They return to the rest of the Legends and Charlie seems to know what they just did.

Nate notice zombies are surrounding the safe house and Zari tells them that their immortality has run out.  The zombies burst in and attack the Legends.

Astra decides to help Gary and asks him how to use a courier.  Before he can show Astra she is liked by the fates.

Charlie arrives in the lab of the Waverider where Gary is.  He fills her in on what happened and then reveals the rings.  Suddenly Hary is killed for behind by the Fates leaving only them and Charlie left.  She says she is tired of running and it is time to go to work.

The Legends of Tomorrow After Show Podcast
The timeline of today must be protected by the Legends of Tomorrow… Come hear all about it with the AFTERBUZZ TV LEGENDS OF TOMORROW AFTER SHOW PODCAST! Join us in OUR timeline as we break down and analyze every episode and character. Make sure to stick around for our fun special segments, news and gossip!
Legends Of Tomorrow S5 E15 Recap & After Show: A Date with the Fates
by AfterBuzz TV

The Elite Reforms Just In Time For Double Or Nothing! – All Elite Wrestling...

Baby Girl Lisa Finally apologizes for using the “N” Word, but is she si...