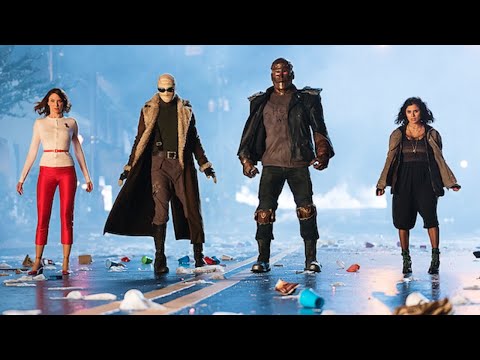 On this weeks RECAP:  DC’s DOOM PATROL – SEASON 2 – EPISODE 1 – FUN SIZE PATROL – we resume the premier episode of the highly anticipated Season 2 right where we left off.  The team is all still miniature with the exception of Larry.
We start the episode off with a flashback to 1927, a carnival in London.  We see a Dorothy Spinner, daughter of Niles Caulder, in a cage seemingly an attraction.  She despises her conditions and the psychological abuse by the owners.  At night she is crying when a mysterious voice whispers the words “make wish” and tells her to close her eyes.  A scene of devastation is left when all the carnival and carnival goers are massacred by an unknown entity.  Dorothy’s power is to bring her powerful imaginary friends to life.
Back in the now, the team is still miniature from the encounter and ending of Season 1 where they went into the painting to stop the end of the world.  Most are also very upset with Niles for being the cause of conditions and life mishaps on his quest to look for immortality, especially Cliff.  Larry takes the team to Tiny Town, the miniature set Cliff had constructed as his hobby.  There they stay eating miniature pancakes and regular sized popcorn trying to find a way to become regular size again.  Cliff spends time hating the rats but also feeds them.  Rita wants to learn to use her powers.  Jane is using the power dampening drug.  Dorothy is actually enjoying this time while everyone seems miserable.
When science doesnt work, the team chooses to go to magic.  Willoughby Kipling appears and makes a deal with Niles to return them to their size in exchange for the magical rabbits foot that gives him immortality.  Niles hands it over, meaning he is now officially dying.
DC’s DOOM PATROL – SEASON 2 – EPISODE 2 – TYME PATROL – Nile is dying and the team searches for a way to keep him alive.
In a juxtaposition of Niles interviewing the team in the interrogation room, the team interviews Niles for answers on why he did this to them.  Rita is taking all of this in stride and is surprisingly defending Niles.  Cliff asks about his daughter, which Niles responds she was expendable.  In a extremely poignant moment Cliff asks Niles what makes Niles’ daughter more important than his.
Larry also guided by his inner spirit is reflecting on his son as well.
Vic is back in Detroit after leaving the group.  He begins a group session to get a hold of his PTSD.  There he meets Roni Evers.  Clearly there is a spark between the two.  She is a former Vet who has been injured.  The two connect on their pain.
Rita is doing her best to mature into a superhero savior role.  She comes up with plans and even when she fails is still the one driving force.  Jane is being confronted by her different personalities. The underground is not too happy with her.
The 139 year old Niles comes up with a plan to regain his immortality.  Rita is concerned for his life while Cliff is doing it out of spite to keep him alive because he seems not to care.  They are sent after Dr. Tyme whos head piece can be the solution to Niles and give him back immortality.  Niles states Dr. Niles is ever yet upon entering his world he seems to be a fun disco loving person.  In a brief moment of conflict listening to Niles, Rita reaches for Dr. Tymes’ head piece which is clock and pulls him back.  He falls over and the clock is cracked, turns out to be his actual head.
With the plan failed and Niles seeming to have lied about Dr. Tymes being and intent the team is dismayed again.
All this and more on the Afterbuzz Aftershow.  Stay tuned.

The Doom Patrol Podcast
Doom Patrol is finally here! This show is AMAZING and as one of DC All Access' best shows, it needs a good panel of DC Fans to break it down! Join us for weekly episode discussions, predictions, plot breakdowns, and insider information as the DOOM PATROL AFTERBUZZ TV AFTER SHOW is here for you! Subscribe and comment to stay up to date, and make sure you leave that rating and comment to support the show!
VIP Fan Message
by AfterBuzz TV