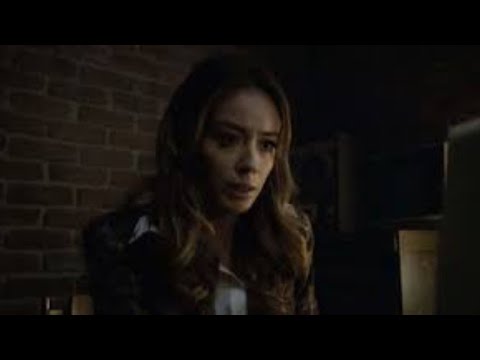 On this weeks RECAP:  MARVEL’s AGENTS OF S.H.I.E.L.D. – SEASON 7 – EPISODE 6 – ADAPT OR DIE – Mack saves his parents or does he, Culson dies AGAIN, and Deke gets left behind.

The episodes starts with the Chromicoms speaking to Sybil, the Chromicom that predicts the future.  The Hunters are dismayed by the current direction of the plan.  Sybil reassures them everything is going to plan, S.H.I.E.L.D. team has just given up their position as predicted and everything is falling into place.  The Hunters realize Sybil’s plan is to overwhelm the team into submission.

The team is planning how to save Mack’s parents, while May and Culson are caught by the Lighthouse S.H.I.E.L.D. ops, and Daisy and Souza are still in the barn with Nathaniel Malick.  Up to date on Deke having shooting Malick, the team makes plans and leave Deke on the ship.

While on the ship, Deke sees Enoch tampering with Simmons’ neck module.  Fearing the worst, Deke takes out Enoch, only to find out the module helps Simmons remember the things she needs while purposely wiping out her memory on the wear about of Fitz.  If she remembers where Fitz is, the Chromicoms can use this information to get him.  The Zephyr, exposing its position and being attacked has made it so the time travel jump will destroy the ship.  Simmons must now remember how to fix the ship.  With the help of Deke the two fix the ship and reawaken Enoch.  Deke apologizes and calls Enoch a member of the family.  Simmons makes Deke swear to tell no one or Fitz’s life is in danger.

Daisy and Souza are tied up in a barn as Nathaniel Malick has decided to come out of his shell and try to genetically steal Daisy’s power.  After watching her at work in the previous episode in which Souza and Daisy took Nathaniel hostage to free the team from Malick, he changed from soft spoken shy boy to a nefarious maniacal power hungry villain, as the apple does not fall too far from the tree.  Nathaniel, using Hydra scientists notions wants to siphon Quake’s abilities into his own by taking her blood and infusing it with his.  Quake, unable to quake because of the drugs in her system is taken as Souza struggles to fight for her but to no avail.

In the lighthouse, May and Culson are being interrogated by General Stoner.  The Lighthouse goes into lockdown mode and launches missiles at the Zephyr without Stoner’s authorization.  In the interrogation room, Culson tries to convince Stoner other wise.  As another agent enters to alert Stoner to a problem in the core, May realizes the new agent is a Chromicom as she gets know feelings from her the way she gets no feelings from Culson.  Culson and May have a discussion on May’s attitude and lack of compassion for Culson, to which May states she has mourned the death of Culson too many times and he always comes back.  She refuses to do so again.  Culson breaks himself and May free from of the restraints and they go to help Stoner who they suspect of being in trouble.  The Chromicoms have learned from Culson how to mimic personality and behavior.  They have been replacing S.H.I.E.L.D. agents with Chromicoms and plan to do so with Stoner.

Back on the carrier to the Zephyr taking Mack’s parents home, Yo yo in talks with Mack’s mom and hearing about her sons as May and Mack’s dad interact.  May feels nothing from the father and realize he too is a Chromicom.  Mack confronts his father at May’s behest in regards to his arm to confirm if May’s assumption is true.  Mack’s parents attack and Mack is forced to eject them from the plane.

On the Zephyr, the when asked where Culson and if he died in the explosion, May says do not worry Culson always comes back.  Mack is silent as they jump.  When they land in the unknown future, Mack gets on his bike and rides away saying he needs some air.  Deke goes after Mack after giving him some space.  As he sees Mack, he gets a radio from Simmons the ship is about to jump and hurry back.  Deke calls to Mack, who ignores him in thought.  Behind them the ship jumps.

All this and more on todays Afterbuzz Aftershow.  Stay tuned.

The Agents of S.H.I.E.L.D. Podcast
Agents of S.H.I.E.L.D. is BACK and we're post-end-game now! How will it effect the show?! Where will we be taken this season with our characters!? Join us every week to break down each and every episode of Agents of Shield here on the AGENTS OF SHIELD AFTERBUZZ TV AFTER SHOW PODCAST!
VIP Fan Message
by AfterBuzz TV