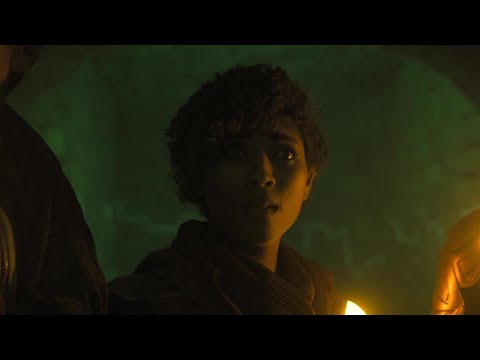 Space, royalty, outlaws, and a rescue mission! It’s the VAGRANT QUEEN AFTERBUZZ TV AFTER SHOW where every week our hosts will be breaking down the episode of this SYFY series. Join us as we get ready to blast off to space every week, plus bringing you a special segment and news and gossip!

The gang crash lands on Planet Wix and is a little banged up. The vine creature give off Tremors vibes and are quite dangerous! While they make their way to the tomb, we get Issac’s back story regarding what happened to him five years ago. Hath breaks the news that Elida’s mom is not alive and they were just trying to get her there to get the mind controlling device. While in the tomb, poor Dengar sacrifices himself. Lazaro shows up, Krog dies in the unavoidable shoot out, and Hath dies from a cave in but is able to make peace with Elida. It turns out Isaac betrayed Elida but he had good intentions. Lazaro makes off with the device and Elida tells Isaac, “we’re done for good.”
Join Kari Lane and James Maple as they discuss the episode with special guest Adriyan Rae!

The Law & Order: SVU Podcast
In the podcasting world, lack of a podcast about Law and Order SVU is considered especially heinous. With AfterbuzzTV, the dedicated hosts who analyze these incredible episodes are members of an elite squad known as the AFTERBUZZ TV LAW AND ORDER SVU AFTERSHOW PODCAST. These are their stories. DUN DUN.
Law & Order: SVU S21 E20 Recap & After Show: Gene or Gina?
by AfterBuzz TV

As the case against Sir Tobi is set to begin in the SVU season finale for season 21, The Things We Have To Lose, a few previous victims from the season resurface, such as Joelle whose husband Leon is getting released from jail after doing 6 months for beating her. Fin allows himself to get too involved which results in him giving Joelle’s son Andre a phone to call him in case Leon comes over. Of course, Leon does and Fin makes a decision resulting in Leon’s death. Kat is also dealing with a previous victim when Lakira calls because she believes that Davies has attacked another trans prostitute on the piers. Meanwhile, Ivy Bucci is acting out. Her mother seeks help from the squad and Rollins takes it upon herself to find the girl and get her on the right back. As if they weren’t busy enough, Carisi and Benson are prepping victims for the big trial against Sir Tobias Moore, whose medical situation pushes back the trial.