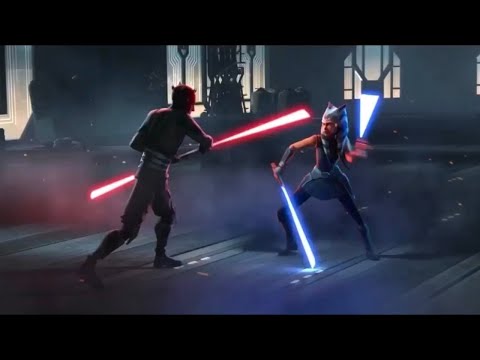 This week, the siege on Mandalore continues! Obi-Wan reaches out to Ahsoka and tells her that Anakin has just killed Count Dooku. He seems skeptical of the council’s decision to have Anakin spy on Palpatine. Meanwhile, Maul has had visions of Skywalker’s future, and descent to the darkness, and he pries Jessi’s mind for information.
Ahsoka Tano confronts Darth Maul, and the two show down in an epic battle on Mandalore. Maul asks for Ahsoka’s help to defeat Sidious, and Ahsoka agrees to join him. Until she asks about Anakin, and Maul tells her the goal is to destroy Anakin before he becomes Sidious’s apprentice. Ahsoka doesn’t believe Maul, and the two fight until Maul is captured on Mandalore.
With two more episodes left, we’re all wondering when Order 66 will be implemented, and what this means for Ahsoka’s immediate future! TO BE CONTINUED
Hosts: Ryan Nilsen, Rachel Goodman, & Frankie Alteri

On the Clone Wars FINALE ALL IS ANSWERED… and the epic conclusion to the hit animated series doesn’t disappoint! Ahsoka and Rex have to escape the star destroyer while evading Order-66-turned clone troopers! Ahosoka refuses to kill the clones and Rex switches his gun to stun. Meanwhile, MAUL is wreaking havoc on the ship and destroys the hyperdrive MID FLIGHT. The ship begins to crash land. Maul gets away and flies to Dathomir. Rex and Ahsoka miraculously survive. They go to the planet the ship crashed on and bury all the clones. There’s a cemetery with their helmets. Before leaving Ahsoka leaves her saber behind. TIME JUMP. Lord Vader himself approaches the crashed ship only to find the lightsaber Ahoska dropped, thel ightsaber he gave her, the lightsaber he ignites with a snowy imperial troop behind him. @RyNilsen @FrankieAlteri @RachelRadnorauthor

After Life After Show
Scroll to top