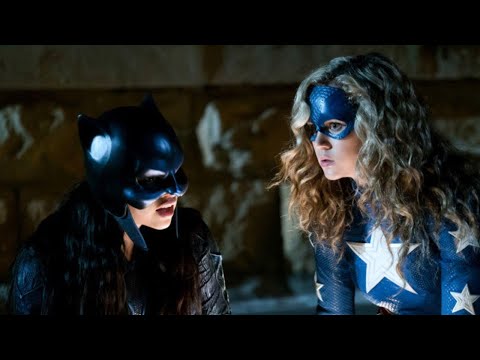 StarGirl After Show Podcast
Courney Whitmore's life changes after discovering not only her stepfather's old life as a superhero, but also a source of immense power in the form of a staff. Join us on the STARGIRL AFTERBUZZ TV AFTER SHOW PODCAST as we follow Courtney's acts of inspiration for future heroes. Subscribe and comment to stay up to date.
StarGirl S1 E8 Recap & After Show:”Daddy's home”
by AfterBuzz TV

On this weeks RECAP: DC’s STARGIRL – SEASON 1 – EPISODE 8 – SHIV PT 2 – Pat is in a car accident, the squad go on a mission, and Stargirl and Shiv rematch.

We start off with Barbara at dinner with her boss, unbeknownst to her Icicle. He leaves for a “business meeting” which turns out being him freezing a Waste Disposal former executive partly responsible his wife’s death in a revenge murder. Barbara gets a call that Courtney and Pat have been in a bad accident, as we watch Pat’s car careen off the road and into a pole.

At the hospital, Pat tells Courtney about the car accident. It is the cover for Courtney’s encounter with Shiv. Pat wants to tell Barbara the truth, but Courtney begs him not to. Courtney is worried about the mission and knows her mother will unallow it.

Cindy and her father Dragon King have a discussion about the events that transpired. Dragon King is not impressed and in fact is disappointed with Cindy, which seems to be his usual attitude. Cindy expresses she was successful, Dragon King is not happy with her actions and threatens to take his mask off as punishment.

Courtney is in bed after her injuries. Barbara seems upset at Pat, and blames him. Mike and Courtney revisit their brother/sister moment except this time it gets sentimental. Mike expresses regret for being jealous and says he is happy Courtney is his sister and Pat is her new dad. Pat has a similar heart to heart with the staff. He talks to the staff who does not respond. He expresses he wants Courtney not to get hurt. As Pat leaves to talk to Barabara the staff shines showing acknowledgment.

Yolanda, Beth, and Rick are not happy with what happened to Courtney. Rick is especially upset and throws a tantrum, however Beth is able to speak reason and says she has a plan. That day all three go over to Cindy’s after school and Beth goes up to the door. Pat shows up and goes with Beth. Cindy’s step mom Bobbie lets them in. Comedically, Pat and Beth fumble that he is Beth’s father and a mechanic. Beth uses her glasses to search the house while Pat stalls. Bobbie asks Pat to fix the plumbing and then comes onto him. Beth goes downstairs to the lair and then upstairs to Cindy’s room.

Henry is in his father’s den suffering from the onset of his powers. Unable to stand the pain he searches for ibuprofen and is able to manifest his telekenetic powers. He finds a key to his fathers closet lair. He finds a letter detailing Cindy is his detail and there to watch him.

Meanwhile. Cindy pays a visit to injured Courtney in bed at her house. Surprisingly Cindy apologizes for her attitude at the football game. She engages in girl talk as Courtney warily engages in return. Cindy seems sincere as she eats all the candy she brought for Courtney. As she leaves she casually mentions she knows Courtney is Stargirl, but wont tell her father. She then threatens she will kill of Courtney’s friends.

Courtney unaware of her friend’s whereabouts texts them Cindy knows her identity. Yolanda updates her on their whereabouts. Courtney then lets them know Cindy is on her way home. Cindy gets home while Beth is in her room. Beth tries to hide, thankfully Yolanda has dawned the Wildcat outfit and climbed the wall to the room. She takes Beth to safety in the nick of time. The friends and Pat make a hasty retreat.

Courtney on the other hand knowing her friends are in danger goes to get the staff. The staff will not go with her at first but then goes. Courntey gets to Cindy’s house and immediately attacks. Cindy and Courtney have another fight. It spills onto the streets. Henry shows up displaying his power and sens a brain shockwave that throws Courtney and Cindy. Cindy is halted by her father’s minions he send her to him. Henry is reading Stargirls mind and knows it is Courtney.

All this and more on the Afterbuzz Aftershow. Stay tuned.