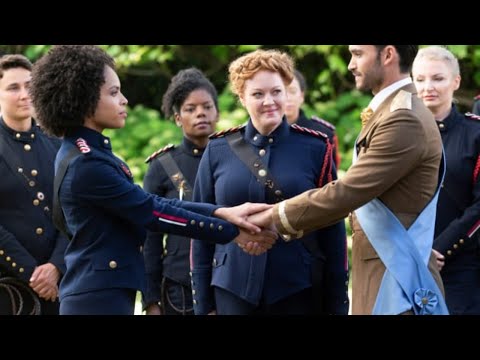 Witches have never been hotter, and now, we’re covering TV’s best new witch Show, Motherland: Fort Salem. Each week, our incredible team of AfterBuzz TV hosts is here to recap all of the magic, with expert commentary, cultural insights, and even wild fan theories and predictions. From Harry Potter to Eastwick to AHS: Coven, TV Witchdom is a hellishly wonderful space, and we’re here to make sure YOU don’t miss a thing.

The unit has conflicting goals for attending the Bellweather wedding; Abagail as arranged an opportunity to impress the Dean of the War College, Raelle wants to attend socially with Scylla at her side, and Tally is hopeful of seeing Gerit. Arriving to the wedding, each are surprised to find Scylla, who had disguised herself as a member of the catering staff. Abagail presents her unit, with Scylla in tow, to General Bellweather but fails to meet her mother’s high expectations, furthering Abagail’s insistence they be at their best when the time comes to meet the Dean. After a lovely ceremony, Tally finds Gerit and takes him away to reunite and confess love for one another, though he is troubled with conflict that soon is revealed in the form of a publicly announced betrothal to someone else. Unfortunately, this is when the Dean of the War College arrives to meet the unit which immediately falls apart. Tally has fled to be alone in a nearby bathroom when Scylla enters, thinking she is alone, and communicates with the increasingly demanding Spree. Shaken, Tally exits to share this information with Anacostia while Scylla dances with Raelle, who are also confessing their love for one another. Meanwhile, Abagail discovers her cousin, the bride, murdered in the bathtub and is attacked by two more Spree disguised as catering staff, all before a swarm of balloons floats in over the wedding party. Thankfully, the many officers present protect everyone from the balloons, save for General Bellweather who went looking for and rescued her daughter, yet everyone present is visibly shaken by the event.
Today’s After show was hosted by Kevin Allen, Bryant Santos, Toree Weaver, and Gunner Teixeira. They are joined by special guest Ashley Nicole Williams!
Follow us on http://www.Twitter.com/AfterBuzzTV
“Like” Us on http://www.Facebook.com/AfterBuzzTV For more After Shows for your favorite TV shows and the latest news in TV, Film, and exclusive celebrity interviews, visit http://www.AfterBuzzTV.com

Motherland: Fort Salem After Show Podcast
Witches have never been hotter, and now, we're covering TV's best new witch Show, Motherland: Fort Salem. Each week, our incredible team of AfterBuzz TV hosts is here to recap all of the magic, with expert commentary, cultural insights, and even wild fan theories and predictions. From Harry Potter to Eastwick to AHS: Coven, TV Witchdom is a hellishly wonderful space, and we're here to make sure YOU don't miss a thing.
Motherland: Fort Salem S1 E10 Recap & After Show w/ Eliot Laurence : Our ancient enemy has returned!
by AfterBuzz TV

The cadets have graduated from Basic Training, but the Bellweather Unit appears to be the only one not advancing to War College. Instead, upon Khalida’s insistence, they accompany Adil (Tony Giroux) and General Alder (Lyne Renee) on a mission to rescue the remaining Tarim. Meanwhile, Anacostia (Demetria McKinney) makes another attempt to understand what motivates Scylla (Amalia Holm), which culminates in the two sharing similar stories of how they found their respective sides after the loss of their parents. After deploying in the Tarim basin, the Bellweather Unite have a heated conversation with Alder, who defends her seemingly questionable decisions as the ever-present challenge of leadership while sharing her own tragic history. Reaching their destination the following day, Alder convinces Tally her efforts are to save wtichkind and better the world, not seize power. Raelle heals a sick child, which convinces the Tarim to follow the soldiers outside, but they are ambushed by the Camarilla. They burn the helicopter pilots at the stake and initiate a gruesome fight, which wounds one of Alder’s Biddies, leaving Tally to offer her youth to Alder in order to keep her alive. As everyone boards the last helicopter, Raelle attempts to once again save the stragling child but is stabbed through the back with a sword and left for dead. Abigail bails in an effort to save Raelle as the chopper takes off but the two are somehow saved by the sickness which Raelle had removed. Finally, Anacostia helped Scylla escape imprisonment, but follows her into the private sector and to the Spree hideout where Raelle’s presumed-dead mother has been giving the orders. Hosted by Bryant Santos, Kevin Allen, Toree Weaver, and Gunner Texiera