How Actress Kron Moore is Surviving the Quarantine 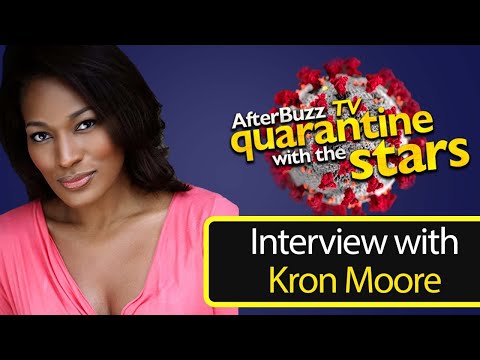 KRON MOORE is known for bringing dynamic female characters to life, showcasing her ability to illuminate their strong inner compass, unshakeable drive and sheer determination. She has proven to be a juggernaut performer who dominates any stage and captures the hearts of her audiences. It is this dedication that makes Kron one the industry’s newest well respected and revered actors by fans and peers alike. Each Wednesday night, she brings to life the First Lady of the United States Victoria Franklin (one of primetime most talked about villains who trends social media for days) in the hit Tyler Perry/BET’s #1 rated series THE OVAL. The dramatic series captures the volatile relationship between the President, First lady, and First children, as they navigate their new life in the White House. Touted as the show’s “breakout star,” the unapologetic FLOTUS continues gaining national prominence for her devilish ways and being a strong-willed ambitious woman with a master plan. Her character has been compared to Kerry Washington’s Olivia Pope, and Viola Davis’ Annalise Keating and others. Next, Moore will recur as Dr. Chapel in STARGIRL based on the DC Comics superhero Stargirl created by Geoff Johns and Lee Moder, that is set to premiere in May 2020 on DC Universe and The CW. No stranger to performing, Moore has been entertaining since her youth. As a vocalist, her voice can be heard on several albums and has been part of various singing groups. The Detroit native boasts a host of television credits including OWN’s David Makes Man as Grace, Amazon Prime’s THEM as Nadine Sims, as well as OWN’s The Haves and the Have Nots, TLC’s Too Close to Home, ID TV’s Swamp Murders, Detroit 1-8-7, among others. Film credits include starring as Linney in the Sundance Film Festival official selection and Alec Baldwin executive produced BEAST BEAST, The SpongeBob Movie: Sponge Out of Water, Into the Storm, Mosquito-Man to name a few. Moore also boasts a storied career in theatre with credits including “Ain’t Misbehavin’, “Triumph and Tragedy- The Life of Sam,” “Little Shop of Horrors” and has a number of television commercials, industrial projects and voice-overs under her belt. Committed to using her visibility and influence in positive ways, Moore remains an advocate for wellness, mental health, anti-bullying, women empowerment and education. Moore is a graduate of The University of Alabama with a degree in Psychology. She also studied Film, Television and Radio Broadcasting at Specs Howard School of Media Arts ranking second in her graduating class. Kron currently lives in Atlanta, Georgia.
Make sure to subscribe to AfterBuzz! – http://youtube.com/afterbuzztv
Follow us on http://www.Twitter.com/AfterBuzzTV

How Actor Beth Hall is Surviving the Quarantine