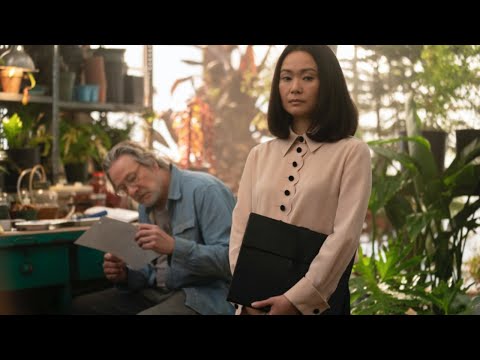 Alex begins the The Con Pt. 1, when she visits Walter in jail. Under the guise of an Army Veteran, working for a non profit organization called “Vets For Vets”, Alex offers to bail Walter out of jail; in exchange for an easy interview about his issues. As Leonard has a crew of workers, set to begin destruction of the crops on the Geist farm, Audrey shows up and makes him aware of the DOD takeover of the crops. Via, an “injunction for critical military property”, anyone who destroys the crop, is criminally liable. Including, the workers hired to destroy it. Leonard decides to destroy it himself, which ultimately proves to be not feasible, as the farm is acres in size. Back at the Geist office, Audrey see’s first hand, how the mighty have fallen, when she meets with her former superiors, to delegate the tasks setting up an expo event, as their new superior. The Con Pt. 2, is in full swing as Alex and Walter have drinks in the bar “Skins”. The two swap military service stories, as well as, accounts of PTSD. Trust rises and then falls, after Walter’s temper flares, when Alex attempts to talk him out of making a visit to the Geist facility. Feeling like her job isn’t done, Alex has to stay in Walter’s town an extra day.
This episode was hosted by Rob Styles @robsteelo

RECAP COPY GOES HERE
Be sure to check out the After Show hosted by: NAMES GO HERE

The Intercontinental Championship – WWE SmackDown for May 22nd, 2020 After...