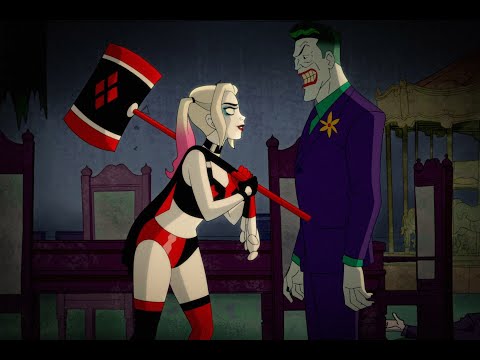 On this weeks episode of DC’s HARLEY QUINN – SEASON 2 – EPISODE 7 – There’s No Place to Go But Down – Harley and Ivy are put on trial by Bane and Two Face goons with the only defense being a literal bat man. When Ivy is called to the stand, Harley encourages her to plead innocent and let the blame for killing Penguin fall on Harley. But she admits it all and makes threats to finish the rest of the crime squad off.
The pair are carried off to what they think will be Arkham, but is really Bain’s reform prison, The Pit. Here, there are no prison doors, and no way of escape; but there are a plethora of enrichment activities to help displace the emotions a villain goes through. Realizing the literal hole, they are stuck in, Ivy and Harley come up with a plan to escape using a comic stand up night as a chance to cause a riot and George Lopez’s performance to steal his helicopter to get out of the pit. The plan goes array when Harley forgets to make her bed, breaking own of the rules set by Bane, and is punished by being pulled from the show. Ivy steps in to take her place and completely bombs her set. Feeling like she has nothing else to loose, she takes the opportunity to express how she truly feels about her life and pointing out the poignant fact that her life was a pit when she was living it and now she is stuck in a literal pit; both extremely depressing. This works for a riot! Although they missed the chance to acquire Lopez’s helicopter, they do use all the furniture and rubbish to stack making a long “ladder” of sorts. As they climb out Bane catches up and grabs Harley’s foot to keep her from escaping. Ivy, using a plant from above, is able to pull them both up until she can no longer hold Bane’s weight in addition to their own. Harley realized this is her moment to let Ivy live out her life and be happy. Harley lets go and does a free fall back into the pit with Bain and the others. Ivy is slingshot out of the pit, only to dive back down to save Harley. They both land at the top for safety and share a kiss. Batgirl and Jim Gordon are attempting to be vigilantes together, but Gordon’s alcoholic
dependencies get the best of him and he blows their cover while trying to detain Rat Catcher.
Later that evening, at dinner, Barbra pleads with her father to stop drinking, and asking him his thoughts on this new Batgirl. Jim does not appreciate Batgril in the least and continues to guzzle down his alcohol and mayonnaise pasta. Their dinner is interrupted by Two Face and his men coming to collect Jim Gordan and his life. But he does not go down without a fight. After being cornered and giving up his gun, he faces Two Face in a fist to fist battle. Batgirl intervenes to save his life and succeeds. Two Face runs away as Batgirl and Gordon have a heart to heart, revealing that Batgirl is, in fact, Jim Gordon’s daughter. Feeling ready to kick butt, Jim gives up drinking and takes back the Gotham City Police Department from Two Face. He does it on his own and wins, putting Two Face behind bars. Jim is back.

The Harley Quinn After Show Podcast
Harley Quinn has broken up with the Joker, and ready to wreak havoc on Gotham to prove that she can be the greatest, or maybe the worst villain they’ve ever seen! Tune in to THE AFTERBUZZ TV HARLEY QUINN AFTER SHOW PODCAST, as hosts Tehran (@IAmTehran) andChauncey K. Robinson (@MsChaunceyKR) dig into the new star-studded animated series on DC Universe!
Harley Quinn S2 E9-13 Recaps & After Shows: "Season 2 Finale!"
by AfterBuzz TV

Episode 10 Description (IMDb): Alone on Christmas Eve, Harley reconnects with a now-sane Joker and heads to Wayne Tower, where their dinner is interrupted by an escaped Riddler and ParaDemons.

Episode 11 Description (IMDb): In order to defeat Psycho’s army, Harley & Joker need to track down Fables’ storybook with the Justice League inside.

Episode 12 Description (IMDb): Psycho unleashes a mind-controlled Ivy, Clayface, and King Shark on the Justice League who are trying to free Gotham.

All this and more on the Afterbuzz Aftershow.  Stay tuned.