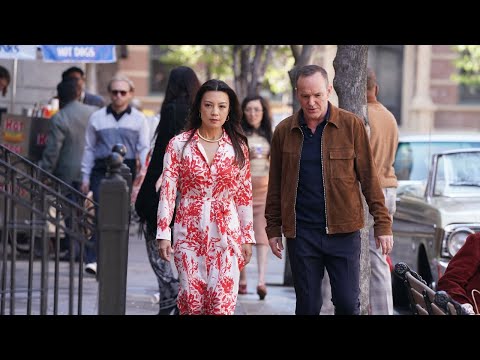 On this weeks RECAP:  ABC’s AGENTS OF S.H.I.E.L.D. – SEASON 7 – EPISODE 5 – A TROUT IN THE MILK – May feels the situation out, Yo Yo doesnt bounce back, Simmons has a neck problem, Deke delivers in a too real way, Mack loves his family, and hasta la vista Enoch.
The team is now in 1973 and trying to fit in but Souza is having a hard time adjusting.  He is the only member of the team that doesnt change outfits, but thankfully his suit still fits in just as a bit of a square.  Coulson and May, Souza and Daisy break into teams as they infiltrate the Swordfish speak easy while Mack and Yo Yo infiltrate the S.H.I.E.L.D. Lighthouse.
Souza and Daisy have a possible pre romance moment as Souza is taken by all the technology he is seeing especially computers and cell phones, as Daisy hacks into the system and hacks information and realizes there is a kill list with known S.H.I.E.L.D. operatives ie Nick Fury and Bruce Banner, in the office of the speak easy.  May and Coulson join the party as General Rick Stoner is introduced at the speakeasy, a S.H.I.E.L.D. legend who Souza recognizes from when he was a not so bright newbie.  Stoner brings out a another S.H.I.E.L.D. legend, Wilfred Malick who is still alive and well despite supposed having been dead days before their arrival in this timeline.  Thats when everyone knows something is off.  Malick’s kids are also alive, including Nathaniel who is supposed to have died as well.  Stoner and Malick introduce the plans to launch Project Insight, a nod to Winter Soldier,the system to target satellites and able to neutralize hostiles anywhere in the world.  This is very dangerous.  May triest to cozy up to Stoner to get more information.  She learns Insight is not slated to launch for a couple years.  Culson and May are spotted by Malick and the Chromicoms come out to attack.  Daisy and Souza use Nathaniel as a hostage, which to the dismay of the Chromicoms forces Malick to stand down.  On the way out Daisy uses her powers and Souza realizes she is more than just a pretty face and a brilliant brain.  Enoch, who has been suspiciously missing from the Speakeasy, shows up in time with a Terminator reference for a fast escape.
Back on board the ship, Jemma and Deke have a talk about Fitz.  Deke wants to know if Jemma has heard from Fitz, which she hasnt but could not tell him if she had either way.  Deke brings up them being together so they could have his mom who would subsequently have him.  Simmons gets back to work but not before feeling the back of her neck where clearly a tech chip implant of some sort has been place.  The team comes back to the ship and notice a time jump is launched.  The Chromicoms are on the move and therefore so are they.  Yo Yo tries to maneuver but is too slow.  The team jumps to Project Insights launch date in 1976.
The Chromicoms visit Malick.  They are disappointed he chose his son over the best interest of destroying Culson and the team.  Malick argues his point that he would not let the team hurt his son.  Chromicoms say this is a flaw in human character that they will use to exploit and hand Malick an envelope, as they have a plan on how to get Coulson and team to expose their locations.
The team splits in two as Deke and Yo Yo go after Malick while Coulson and May go after the launch.  After Malick threatens Deke and Yo Yo with his plans of action if they make a move, Deke shoots Malick and kills him.  Confronted by Yo Yo about his actions, Deke says he is restoring the status quo.  Meanwhile Deke and Yo Yo’s radio silence has lead May and Coulson who are trying to plant explosives with out a way in.  They go for General Stoner who recognizes May from the Speakeasy.  Coulson tries to convince of the truth who seems to believe Coulson, however May reacts by punching him in the face.  Using her new found emphatic powers she says Stoner was not going to be helpful.  May and Coulson plant the explosives but before they can detonate, Mack who is on the ship with the rest of the team gives the order to abort as one of the screens show his parents in a cell on the base.  They would be killed in the explosion.  Project Insight is launched and in order to stop it Mack gives the order for the ship to shoot it down exposing their location as the Chromicoms predicted.
All this and more on the Afterbuzz Aftershow.  Stay tuned.

The Agents of S.H.I.E.L.D. Podcast
Agents of S.H.I.E.L.D. is BACK and we're post-end-game now! How will it effect the show?! Where will we be taken this season with our characters!? Join us every week to break down each and every episode of Agents of Shield here on the AGENTS OF SHIELD AFTERBUZZ TV AFTER SHOW PODCAST!
VIP Fan Message
by AfterBuzz TV